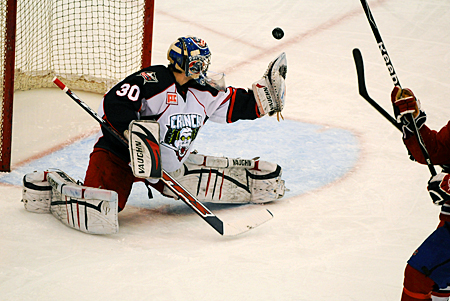 The Blue Jackets have re-signed minor-league goaltender Dan LaCosta to a one-year, two-way contract. He'll likely battle Kevin LaLande for the No. 1 job with the Jackets' top affiliate in Syracuse.

For the first time since Pascal Leclaire was duking it out with Karl Goehring in 02/03 and 03/04 the Crunch have a solid two-man tandem in net. Lalande was acquired at last year's trade deadline from the Calgary Flames for a fourth round pick. LaCosta was awesome for the Jackets during a brief stint with the big club last season, including shutting out the Avalanche in his second NHL start. Lalande is viewed as a high-end goaltender as well, so it will be interesting to see the two battle for the starter's job in Syracuse and the eventual callup to the bigs. It's likely both will see time in the Columbus net at some point this upcoming season.