Jackets' Prospects in the CHL

Share All sharing options for: Jackets' Prospects in the CHL 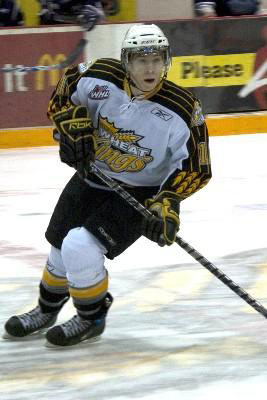 The Canadian Hockey League, or CHL, is comprised of three leagues- the WHL, the OHL, and the QMJHL. It is generally considered to be the top junior circuit in the world, and the Jackets have six, possibly seven of their prospects playing there. Here's a breakdown of each player:

LW Matt Calvert (Brandon Wheat Kings, WHL): For anybody who follows the entry draft, you'll know of two players who were taken very high in this year's draft. Brayden Schenn went fifth overall to the LA Kings, and winger Scott Glennie went eight overall to the Dallas Stars. These two players, along with Calvert, formed arguably the best forward line in all of junior hockey. Calvert is at a crossroads, as he will be 20 this season. CHL teams can only carry three 20 year olds, and most high-end prospects like Calvert make the jump to minor pro at this point. Look for Calvert to either stay with his junior team the Brandon Wheat Kings or join the Syracuse Crunch of the AHL for next season.

RW Tomas Kubalik (Victoriaville Tigres, QMJHL): The 2009 CHL Import Draft took place today- it's an important part of the roster-building process for CHL teams as they can potentially add a high-end talent to their roster. CBJ first rounder Jake Voracek is a former first overall pick of the Halifax Mooseheads in the import draft. Tomas Kubalik was drafted last year in the import draft by the Victoriaville Tigres of the QMJHL, but chose to spend last season at home in the Czech Republic. This season however, he is making the jump overseas to join the Tigre. Kubalik is a power forward who will look to add offense to the Tigre lineup.

RW Kyle Neuber (Mississauge St. Michael's Majors, OHL): Neuber was just drafted by the Jackets in the 2009 NHL Entry Draft. He was a seventh round pick, and looks to be the enforcer of the future for the Jackets. Like Calvert, he will be 20 this year, and is at a crossroads between playing this season in junior with the Mississauga St. Michael's Majors or making the jump to the Syracuse Crunch. He is an extremely physical player and a fearless fighter.

D Steve Delisle (Gatineau Olympique, QJMHL): Delisle is a stay-at-home blueliner who's best asset is his positioning. He reads the play well, and can dish out the occasional big hit. He doesn't play a flashy game, but is very effective. He has good size and can play the penalty kill. Delisle will return to Gatineau for this upcoming season.

D David Savard (Moncton Wildcats, QMJHL): Savard was recently drafted by the Jackets in the Entry Draft. He is a mobile blueliner who can put up serious offense from the back-end. He makes a great first pass and can play on the powerplay. He will be a big part of the Wildcats offense this season. An interesting note is that he was previously traded for former CBJ prospect Matt Marquardt.

D John Moore (Kitchener Rangers, OHL): There is plenty of speculation on whether or not CBJ first rounder Moore will be playing in the CHL at all. He previously committed to Colorado College, but he was drafted by the Kitchener Rangers in the bantam draft, so he must make a choice between the college route or major junior.  The guess here is that he goes the CHL route, as it is more akin to an NHL schedule, and Kitchener should be an above-average team.