Share All sharing options for: NHL Draft Day 2- Jackets Focus on the Blueline 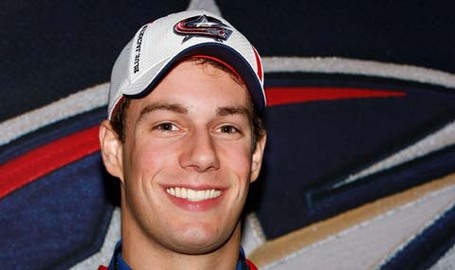 Day two of the NHL Entry Draft took place today, with the Jackets making five more picks. They pulled off another trade, this time sending the third and fourth round picks they acquired from the Isles yesterday back to New York for a second rounder.

With that second rounder, the Jackets drafted center Kevin Lynch from the US U-18 NTDP. They didn't pick again until the fourth round, and made picks in each of the subsequent three rounds. In total, the Jackets used four of their six picks on defensemen. Here's a little bit on each of the day two picks:

Lynch is a prototypical checking line center. He won't put up a ton of points, but he is very good defensively. He plays a lot like John Madden of the New Jersey Devils. The Jackets hope he will anchor the checking line down the road.

Savard is a mobile two-way blueliner, who plays a similar game to first rounder John Moore. He is excellent in his own zone, but can make things happen with the puck. Makes a good first pass.

Larkin is huge, checking in at 6'5" 205. He is a bit of a project, but he is a solid two-way defenseman who is committed to Colgate University. His mother is Italian and he spends his summers in Italy. A very interesting man to be sure.

Blomqvist is another towering blueliner, listed as 6'4" 189. He is an overage pick, and is already 19. He is a defense-first blueliner who can dish out heavy hits and is very sound positionally.

Neuber is another overage pick, and is likely the enforcer of the future for the Jackets. He is an excellent fighter, and is very physical with the gloves on. He previously had a tryout with the Vancouver Canucks.

Later in the week I will go into more depth on all of the new prospects in the CBJ system, as well as update the depth chart, which you can find on the left side of the main blog page under "sections".