John Moore at a Glance

Share All sharing options for: John Moore at a Glance 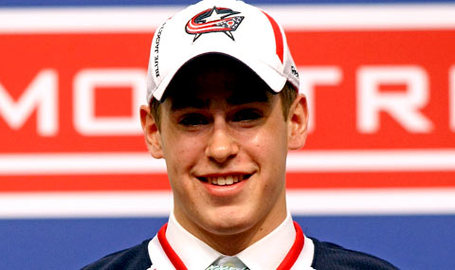 Here are some quick bits of info on the newest member of the Jackets organization:

I found a list of his faves, courtesy of the The NHL Draft Site:

- Moore is scheduled to attend Colorado College next season, but as The Hockey News mentioned in their profile on Moore in their Draft Preview, he may play in the Ontario Hockey League. Aaron Portzline also mentioned this in his Puck Rakers blog this morning. Moore was drafted in the second round of the OHL Priority Selection (draft) by the Kitchener Rangers. It would be great to see Moore play Canadian junior, the style is more akin to the NHL than college hockey.

- Moore was the captain in Chicago last season. He possesses strong leadership skills.

- He is one of the best skaters in this draft, for a man his size he can skate like the wind.

- If he does in fact play major junior this upcoming season, it will likely be for just one year. He will be 19 this November, so next year would be his overage season in the OHL, the year most top prospects make the jump to the pros. His development track would likely be him playing next season in Kitchener, then moving to the Syracuse Crunch for 2010/2011, and then he'd be looking to make the jump in 2011/2012 to the Jackets. He could also take some more time in the AHL if necessary.

- Moore and fellow Jackets prospect Will Weber were teammates on the 2007/2008 Chicago Steel squad.