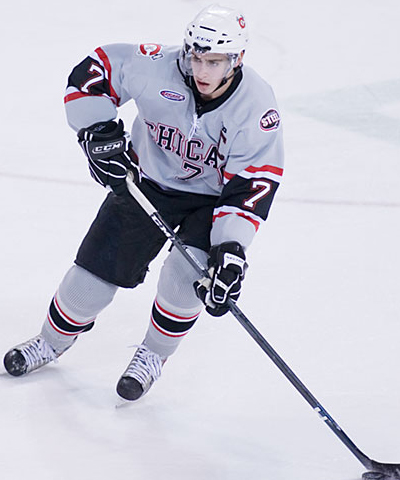 The Jackets were busy this evening, making two trades on the way to selecting defenseman John Moore 21st overall in this year's NHL Entry Draft.

The Jackets then used the 21st overall pick on Moore, a two-way defenseman who played last year for Chicago of the USHL. He was named the top defenseman in the USHL this past season, and has all of the tools required to be a top pairing stud defenseman. He checks in at 6'2" and 190lbs. Moore will attend Colorado College next season, so the Jackets will have some time to let him develop before they have to sign him to his entry-level contract.

Moore was rated fairly high, but slipped a bit in the draft. When the Jackets saw him available at 21, they pounced and got their guy. Unfortunately, it cost them the second rounder they acquired from the Isles, leaving them without one again. That said, tomorrow could see a trade involving some later picks or even roster players being moved to acquire a second rounder. Tomorrow I will give a look into some potential players that could don the Jackets sweater and  I'll also profile each of the Jackets' picks.