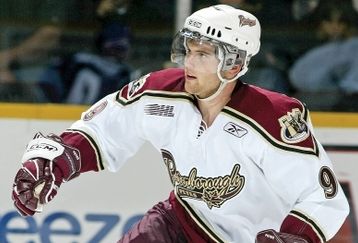 In the fifth installment of our CBJ Draft Preview, I'll look at 10 players who could potentially join the Jackets organization later this month at the Entry Draft. First, a preface: the draft is a crapshoot, both for how players will develop and when they will be drafted. I am assuming a lot in this preview, for example, there are some players who I think will be long gone before the Jackets draft at 16. That said, some players slip, and some are taken higher than many think.

I am going to give a brief scouting report on ten players, five forwards and five defensemen. I am on record saying that I believe the Jackets will target a defenseman, but a physical forward with scoring ability could also be on Scott Howson and the scouting staff's radar.

I'll start with the blueliners:

Dmitry Kulikov: Kulikov just completed his rookie season in the QMJHL. Often times when a Russian player makes the early leap to North America, it shows a commitment to playing professionally in the NHL. Kulikov is a two-way blueliner, with a strong offensive game. He has good size as well, coming in at 6-1, 195. He can QB a powerplay, provide offense 5 on 5, but is far from a liability in his own end. Kulikov has a good chance of going before the Jackets pick, but there's also some hope that he will fall to 16.

Ryan Ellis: Ellis just completed a Memorial Cup-winning season with the powerhouse Windsor Spitfires. It has been quite a season for Ellis, not only did he help his team win the top trophy in junior hockey, but he also helped Team Canada win the gold medal at the World Junior tournament. Ellis is an offensive blueliner, with great vision and an absolute cannon of a shot. He's built a lot like current CBJ defender Kris Russell, as he comes in at 5-10, 175. Like Russell, he is a great skater, but the difference from Russ is that Ellis' shot is heavy and accurate. He is another long shot in terms of falling to the Jackets at 16, but his size could lead to him falling a bit down the draft board.

David Rundblad: Rundblad is a part of a strong Swedish contingent who could go in the first round of the draft. He is another offensive defenseman, who can do almost anything he wishes in the offensive zone. This comes at a bit of a cost however, as Rundblad is less than polished in his own end. He has the size (6-2, 190) to be a physical presence, but defensive awareness is something that can be coached. He sees the ice very well, and is ideal as a powerplay QB.

John Moore: Moore seems to fit the profile of CBJ draft choice. The scouting staff and GM Scott Howson has shown more of a willingness to draft college-bound players since Doug MacLean was let go. Moore is bound for Colorado College next season, after spending the past year in the USHL with Chicago. Current CBJ blueline prospect Will Weber also spent time with Chicago, before joining Miami (Ohio) for his college career. Moore is a two-way defenseman, who does everything right but doesn't necessarily shine in one category. He is a phenomenal skater, and in this NHL, that is a necessity.

Simon Despres: Despres is huge, plain and simple. He weighs in at 6-4, 215. He doesn't put up a ton of points, but is a generally solid defenseman. He has been lacklustre in stretches this season, but he has the ability to ramp up his play. If he can find consistency, he can top out as a very good second-pairing defenseman.

Now, on to the forwards:

Zack Kassian (Pictured above): The general coinsensus on Kassian is that he is a near-clone of a current NHLer- Milan Lucic. Kassian is a power forward, who plays a very physical style, while contributing offense to the lineup. He's curently 6-3, 205 with room to grow. He scored 63 points while putting up 136 PIMs this past season with Peterborough of the OHL. The Jackets have drafted a lot of skill forwards lately, so adding a physical winger like Kassian would only strengthen the already-impressive future forward corps.

Peter Holland: Holland is currently a center with the Guelph Storm of the OHL. He has good size (6-2, 190) and projects as a solid two-way pivot. He may make the move to wing in the pros. He has great offensive instincts, and can contribute on both ends of the rink. He can bring his A game consistently, he will be a solid number two center, or second line winger.

Kyle Palmieri: Another college-bound player, Palmieri is a physical center who will be joining CBJ prospect Teddy Ruth in Notre Dame next season. He was dismissed from the USA U-18 NTDP for alledgedly refusing to rat out teammates. Most scouts won't let this affect his draft status. He isn't the biggest forward, measuring in at only 5-10, 195, but he plays a physical style and doesn't get pushed around. Like Holland, Palmieri is currently playing center, but may make the switch to the wing in the pros.

Chris Kreider: Kreider is a tough player to gauge. He is currently playing high school hockey in Massachusetts. He is acknowledged as being the best skater in the draft, and has high-end offensive skill. He is also a big guy, coming in at 6-2, 200. He plays the wing, and isn't afraid to use his body. He will likely go the college route, which would fit the bill for recent CBJ draft picks.

Drew Shore: Shore was a teammate of Kyle Palmieri on the US NTDP. He projects as a prototypical third line centre, which is a hole in the CBJ prospect system. He seems like a guy who will have a similar career to Jacket Mike Peca, a defensively adept pivot who will get plenty of PK time and will contribute with occasional offense.

These are only 10 possible picks, as I mentioned earlier anything could happen, and the Jackets could end up with a player who I haven't listed here. These 10 prospects however, have a good chance of being around when the Jackets pick, and they seem like they would be on the radar of the scouting staff.

Personally, my choices are Kulikov, Ellis, Rundblad, or Moore if the Jackets go for a defenseman. If a forward is taken, I would like to see either Kassian or Palmieri don the Union Blue at the end of the month.

Who would you like to see the Jackets draft? One of the guys I've listed, or maybe somebody else? Hit the comments!