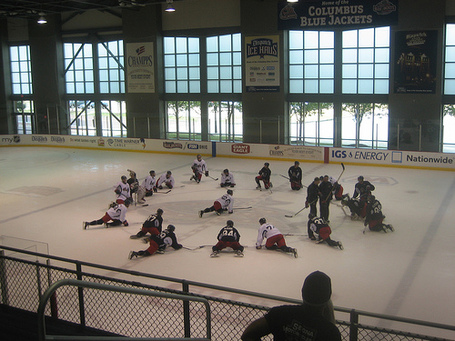 The Jackets will hold their annual summer rookie development camp later this month, with the event running from the 29th of June through the 3rd of July. It will take place, as always, at the Dispatch Icehaus.

The camp is used as a primer for CBJ prospects, free agent invites from Canadian junior, college and minor pro, and recent draftees. They are put through the motions in a mini-camp, where the early stages of team philosophy are taught, and it also serves as a way for team management to get a glimpse of their prospects and some potential new young players.

Here are the current CBJ prospects who have been invited:

Along with those prospects, the Jackets have invited a handful of players, here's a blurb on each:

Brock McBride: Near the end of the most recent AHL season, the Hartford Wolf Pack of the AHL signed McBride to an amateur tryout deal, after he finished his college career at St. Lawrence University. He played in eight games, putting up four assists in that span. He is an offensive forward. He is a candidate to earn a contract with the Crunch.

Kevin Harvey: The Jackets are familiar with Harvey as he was a member of the Syracuse Crunch for parts of last season. He is a pure grinder, an effort guy. If he impresses, he could be a full time member of the Crunch next season, rather than riding the buses between the ECHL and AHL, as he did last season.

Matt Caria: Caria just completed his junior career and is looking for a pro contract. He bounced around the OHL, playing for Toronto/Mississauga, the Soo, and Plymouth. He is an offensive forward, with good size. Caria has had discipline issues in the past, and his reputation is as a mouthy player who if he could maintain focus could put up serious points.

Kelly Geoffrey: Another player who just completed his junior career, Geoffrey is a bottom-six style of player who is undersized. He spent most of his career with the Erie Otters of the OHL, but in his last season of junior he was moved to the woeful Kingston Frontenacs, coached by Doug Gilmour.

Tim Miller: Like Kevin Harvey, the Jackets are somewhat familiar with Miller, as he spent some time with Syracuse last season. Miller was signed to an ATO by the Crunch at the end of last seaon, after he completed his college career at Michigan. He has good size at 6-1 190, and has good offensive instincts. He played in one game with Syracuse, scoring a goal in his pro debut.

Tim Filangieri: Like Miller, Filangieri was signed to an ATO by the Crunch at the end of last seaosn. He had just completed his college career at Boston College. He was a teammate of current CBJ prospect Cam Atkinson. He is a steady, stay-at-home type, with good size at 6-2 210.

Kevin Roeder: Another player with ties to current CBJ prospects, Roeder just completed his college career at Miami (Ohio) playing with Will Weber and Trent Vogelhuber. Roeder is an undersized offensive defenseman.

Spencer McAvoy: Perhaps the most promising of the invites, McAvoy was second in defenseman scoring for the Swift Current Broncos this past season. He just completed his junior career, and could get a contract with the Jackets if he has a successful devo camp and earns an invite to Traverse City.