Share All sharing options for: More on Dave Rook 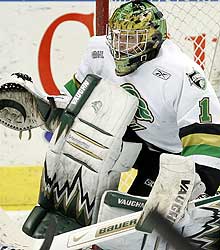 As Andy posted eariler, the Jackets have added Dave Rook to the organization to serve as goaltending coach. He replaces Perry Elderbroom, who was filling in for Clint Malarchuk- who is recovering from a self-inflicted gunshot wound.

Rook is joining the Jackets full time after spending the past few seasons as a goaltending consultant and scout for the St. Louis Blues. The most important part of this hire is that Rook is a former goaltending coach of the London Knights of the OHL, and one of his disciples was Jackets goalie Steve Mason. Mase was an unheralded backup seeing limited duty in the season that Columbus drafted him, but the year after became arguably the best 'tender in the OHL. Under Rook's guidance, Mase went 45-13-4 that season, and the year after Mase led Team Canada to a gold medal at the World Junior championships.

Mason is one record stating that Rook was the most influential coach he has ever had, which bodes well for the work they can accomplish together in the Jackets organization. Rook is eligible to join the Jackets at the conclusion of this month's entry draft.