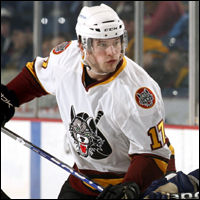 The Jackets made a trade today, acquiring power winger Jordan LaVallee-Smotherman from Atlanta for future considerations. The future considerations amount to the Crunch trading blueliner Tim Filangieri to the Chicago Wolves. The Jackets weren't able to involve Filangieri in a deal because he was Crunch property, whereas LaVallee-Smotherman was on a two-way contract with the Thrashers. When I used to watch this guy play in the QMJHL he was just Jordan LaVallee, HockeyDB has him as just Jodran Smotherman. Hmmm.

From Aaron Portzline at the Dispatch and Lindsay Kramer respectively:

The Blue Jackets made a minor deal today, acquiring left wing Jordan LaVallee-Smotherman from the Atlanta Thrashers in exchange for future considerations.

LaVallee-Smotherman, 23, has been assigned to minor-league Syracuse.The poor team seamstress will need a week to fit that name on the back of a jersey.

The forward was Atlanta’s fifth pick, 116th overall, in the 2005 Entry Draft. He has collected one goal and one assist for two points and is +1 in four career NHL games with the Thrashers and has spent most of the past three seasons playing with the AHL’s Chicago Wolves.

Columbus has made a trade that brings power forward Jordan LaVallee-Smotherman over from the Chicago organization in exchange for future considerations.

Crunch captain Derek MacKenzie played on a line with LaVallee-Smotherman on the Wolves a few years ago.

"He's not a flashy guy. He has good hands. He has a knack around the net,'' MacKenzie said. "If he has to, he doesn't mind dropping the mitts."

Added Chris MacFarland, asst. GM of Columbus: "We liked his size. We think he still has a chance to get better for awhile. Probably the last three weeks, we've talked to Atlanta about him. They wanted to find a new opportunity for him. I talked to Howard (Dolgon) about it, he was excited by the move. That's important to us, too.''

LaVallee-Smotherman is on a two-way deal

In a separate deal, Syracuse has sent defenseman Tim Filangieri to Chicago. A stunned Filangieri was pulled off the ice late in practice Thursday and given the news.

"Well, one of the first pieces of advice (when he got into hockey) was to learn to live out of a suitcase and be prepared for anything,'' Filangieri said. "It kind of stinks to be leaving Syracuse. When he (Yates) first told it to me, I didn't believe it. I really enjoyed being in Syracuse. Everyone from the front office down to the players are first class.''