Game 3 - A Visit to the Shark Tank

Share All sharing options for: Game 3 - A Visit to the Shark Tank 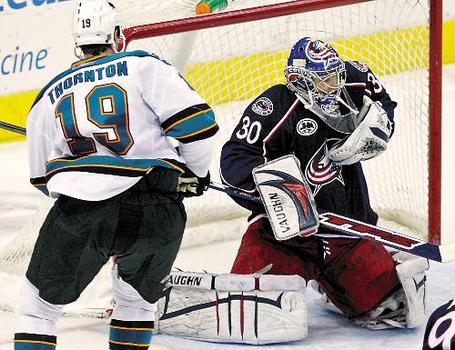 For the first time in franchise history, the Jackets start the season at 2-0. The Jackets defeated the Minnesota Wild 2-1 at home in their first game, and spoiled the Vancouver Canucks home opener by defeating them 5-3. The game against the 'Nucks was a typical one for a team like

the Jackets- skilled, physical, but young. The inexperience allowed the Canucks to make a game of it- the Jackets had a 4-1 lead but Vancouver scored twice to make it 4-3. A late powerplay goal sealed the victory for Columbus, but they obviously let the foot off of the accelerator a bit after going up by three goals. I'm sure Hitch has brought this up, so don't look for the young Jackets to sit on any leads from here on out. The offensive breakout was a great sign, with Juice, Rusty and Filatov (still need to find a good nickname for him) scoring three quick ones to chase Roberto Luongo from the net.

Tonight's game is another home opener in a foreign building, this time in San Jose. The Sharks haven't looked especially sharp, but as was the case in Vancouver, the Sharks will look to impress the pissed-off home fans in their own building. Sports fans tend to have a short memory, and there's no doubt that the Sharks have a lot to prove to the fan base after their disappointing finish to last season, bowing out to the Ducks in the first round after winning the President's trophy.

This game has the makings of a physical battle, with both teams featuring physical forwards who like to bang and crash. With the talent that Sharks possess, you can't let your guard down for a second. The (potentially) dynamic duo of Joe Thornton and Dany Heatley are dangerous every time they are on the ice. Paddy Marleau is also dynamic, and you can't forget about guys like Setoguchi or Clowe either. Clowe has yet to register a point, so one would think he is a man on a mission tonight. He's a guy I am going to key on while watching the game tonight.

There have been some lineup changes for Columbus, most notably is the swapping of Vermette and Brrassard. Brass slides down to play with Filatov and Voracek, while Vermette lines up as Nash and Juice's pivot. I can't wait to see what kind of magic that second line can come up with. This is a move to kick-start Brass, who is without a point thus far. Also, it's unlikely that Jared Boll will be in the lineup, after taking a dirty hit from Vancouver's Darcy Hordichuk. (Hordichuk has since been fined, with no suspension). Look for either Mike Blunden or Derek Dorsett to make their season debut in his place on the fourth line.

Also, this could mark the debut of blueliner Anton Stralman in a CBJ sweater. He's been practicing with the Jackets, and is game-ready. The question then becomes, who sits out? Just speculation here- but what if the team went with seven defensemen tonight, electing to not fill Boll's spot and double-shifting forwards with the fourth line as they did last game after Boll left? Mase will get the start, look for Mathieu Garon to make his debut against the Coyotes. An interesting matchup will be Sammy Pahlsson against Joe Thornton. He has a ton of experience against the Sharks from his days in Anaheim. Columbus will also be facing two former players tonight in Manny Malhotra and Jody Shelley. It will be interesting to see if Manny and his checking line will see a ton of time against Nash's line, or if this will be a classic battle of number one lines against each other.

Regardless, this has the makings of a great game, unless either goaltender faulters. In that case, it has the potential to be a blowout in one direction.

The Blue Jackets must avoid making penalties, as the Sharks have scored more goals on the power play (six) than at even strength (four) this season. The Sharks will unfurl their 2008-09 President's Trophy and Pacific Division championship banners tonight. The game is their home opener. It's possible that defenseman Anton Stralman could make his Blue Jackets debut. The Sharks were preparing to recall left winger Jamie McGinn from the minors, meaning they might adjust their projected third and fourth lines.