Share All sharing options for: Game 9- Jackets get Ducky 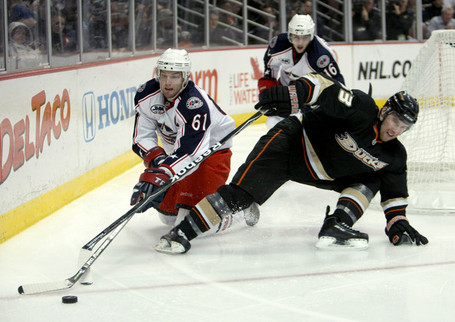 Another late one! The Jackets are in Anaheim tonight taking on the Ducks. The Ducks haven't had the start to the season they were hoping for, currently sitting in 13th in the Western Conference. This will still be a difficult game for Columbus, however, because Anaheim remains as one of the most physical teams in the league, and they are at home.

The Ducks have two scoring lines, one anchored by the Getzlaf-Perry combo and the other by the duo of Koivu and Selanne. Bobby Ryan and Joffrey Lupul round out the top six. J.S. Giguere will get the start for Anaheim. As for the Jackets, their lineup has been completely rearranged. After suffering losses to both Alberta teams, Ken Hitchcock has decided to ice a very different lineup from what we are all used to seeing. Derick Brassard has been moved down to the fourth line. and RJ Umberger moves back to center on the top line with Rick Nash and Jason Chimera. It's hard to say who will be joining Brass on the fourth line. Anaheim has a pair of goons in Mike Brown and George Parros in the lineup, so this may be a game for Andrew Murray and Jared Boll to suit up for. Mike Blunden and Nikita Filatov could however see time if Hitch wants a larger dose of offense. Mase gets the start.

This will no doubt be a physical game, with both teams pissed off and needing to right the ship. The Ducks have been horrible on the powerplay of late, and the Jackets still have a fantastic PK, so special teams will figure in heavily. I think this game, given the physical style both teams play, and the level of skill each team possesses, should make for solid entertainment. If Boller plays, I'm sure we'll see a scrap. Like every game though, goaltending will be key. Mase needs to pull up his socks big time, and this could be the game to get him back on track.