Share All sharing options for: Game 4- Jackets try to Tame the Desert Dogs 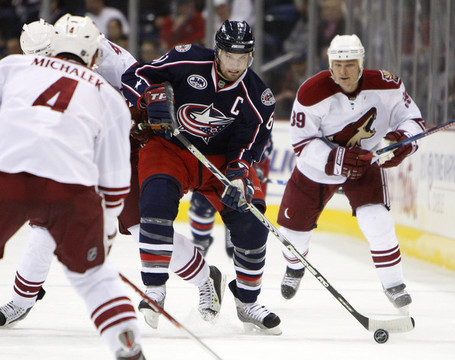 The Jackets are taking on the Coyotes tonight, in Phoenix. This marks the third straight home opener in a foreign building for the boys in blue. The Jackets are coming off a 6-3 loss to the San Jose Sharks, a game where Mason didn't look sharp and was pulled in favor of Mathieu Garon.

This is an important game for the CBJ. They were swept in four games last season by the 'Yotes, and Phoenix has looked good already this season, shutting out the Cup Champion Penguins the other other night. The two teams have similar styles- young, hard working, with good goaltending. This could be a close game.

Ken Hitchcock has juggled the lines again, this time putting Derick Brassard back on the top line with Nash and Huselius, and reuniting the second line from the end of last season- RJ Umberger will join Anotine Vermette and Jake Voracek. Nikita Filatov was moved to the fourth line. Mathieu Garon will get his first start of the season.