Share All sharing options for: Well, We're Up to 90 Points 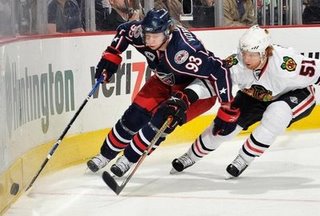 This was a defensive chess match tonight against the Hawks.... except for overtime. We again were able to pull a point out of a game, but it would be nice to get on the winning side of some of these exchanges.

I thought Chimera was skating a lot better last night. I hit this point early since I dogged him out. He did have more burst, not the burst we are used to, but he'll need some time. I won't comment on his play.

The entire team was bobbling pucks all night. It was a puck control nightmare. We rarely created scoring opportunity, but on the other hand we didn't allow many either.

Mason got us the point tonight. There were a couple heart pounding sequences in the crease, but they didn't find the net. I'm sure he'd like to have the last one back, but he gave us plenty of chances to win.

Russell had a bipolar game. His giveaway in the first was awful, at least he dove back headfirst into the play. (Good think Commodore b****slapped it out of the zone). He had the game on his stick in OT and didn't get the net. I'm starting to understand why he is a defensemen instead of a forward. I'm also impressed with his durability this year because he gets smashed at least once a game.

Quiet night from all of our scoring line players.

Peca-Boll-Murray didn't see a lot of shifts late in the game.

Mancrush of the Game: Jake Voracek. He was our best player tonight. He made two amazing passes that lead to a couple of our scoring chances. He was solid along the boards. I would have much rather seen him up with Nash tonight. I would have left Umberger with Vermette, because the second line didn't have much punch.

Whippin on Lack of Physical play tonight. Peca laid one nice hit and Methot had a couple, but that was about it tonight. I'm not sure why Boll only got about 7 minutes of ice. I thought he was pretty good in the first period.

We did get to 90. 92 is pretty solid ground regardless what happens. Hopefully we don't OT Loss our way into the playoffs.

Hit the Comments. FIRE Away.