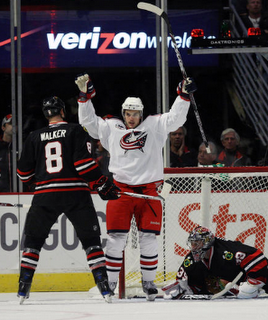 The Blue Jackets defeated the Chicago Blackhawks tonight 4-3 in the shootout to clinch the first ever playoff birth in franchise history.
As all games have been with Chicago this year, it was a back and forth affair. The Blue Jackets were playing catch up most of the night, but they prevailed. The Hawks went up 2-0, 3-2, and controlled much of OT, but it didn't matter. Blue Jackets Captain Rick Nash netted the game-tying goal late in third when the game was on the line.
Fedor Tyutin had the shootout winner against Nikolai Khabibulin. Fedor Tyutin. Hitch seems to have some things up his sleeve for the post-season.
Steve Mason had another strong game. He made the saves when he had to, and that's all you can ask of your goalie.
Kris Russell had a very good game. He was flying all over the ice, and kept the puck in the zone in a few key situations. He played solid defense, and had great positioning to break up a few odd-man rushes and recovered well.
How about Manny Malhotra diving to keep the puck in the zone, along with help from Jan Hejda on that Nash goal? It's fitting that Nash scored the most important goal in Jackets history. Chimera with a nice assist on the play, too. It's great to see him have his speed back. I felt like he was truly a threat tonight with his speed and did a great job stretching the defense, something we've lacked since he and Brassard went down.
And I haven't even mentioned Antoine Vermette. Another excellent game. This guy is a Blue Jacket through and through. Hard working, gritty goal. And a sweet assist on the Williams goal. How good is Jason Williams? 12 goals, 17 assists, and 29 points in 37 games with the Jackets.
What brilliant acquisitions by GM Scott Howson.
How awesome is this?!