The One that Got Away

Share All sharing options for: The One that Got Away 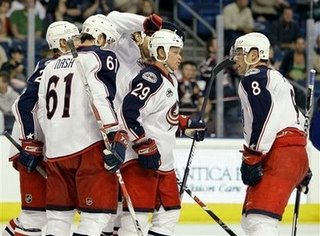 Giving away leads is never fun, giving points to Nashville is annoying. We had our opportunity to bury our nemesis and we did not. A loss could have been devastating for Nashville's playoff hopes and a near clinch for ours. I thought we played a pretty good game overall, but we still need to develop the killer instinct to put games away early. When you allow teams to get back into games, you are asking for a roller coaster finish.

I was honestly shocked by the lack of jump and intensity from Nashville. They really didn't get their legs moving until we let them back into the game. A couple tough luck deflections cost us tonight, but that's the way it goes.

The 4 minute powerplay was an awful call by the officials, fortunately for the Preds we got nothing going during it.

Nash brought his bucket tonight. He has lead this team down the stretch and came up with two big goals tonight. These were old fashioned Nash goals. Going to the net. That's how he got 40 in his second year.

Json Williams does disappear for long stretches, but dude does score. It was an amazing pass from Vermette to knot it at 4. Vermette played huge minutes for us tonight. So many little plays. He has been amazing on the PK, especially in OT tonight. Hopefully we can sign him to a reasonable deal in the offseason, he's a fantastic fit for this team.

Who needs big deadline splashes or huge UFA contracts, when you can get this kind of productivity out of smaller deadline deals? These two players have transformed the offense of this team.

Hopefully the loss of Huselius is not a long term deal. It really through our lines into a frenzy. Perhaps we'll actually have a Filatov sighting tomorrow. I'd probably rather see Nash - Malhotra - Voracek/Williams and insert a Dorsett/Murray into the lineup... more on that later.

I did not like our bottom 6 tonight. They did not establish much puck control. The play made by Voracek on the Novotny goal was stellar, but that was the glimmer tonight.

Mason was victimized by his teammates tonight, but didn't play a bad game. 4 goals is unsightly, but he really could do much on any of them. He made big saves to keep us in.

Chimmer still didn't/wouldn't crank the wheels like he was pre injury. He made a great steal late in the third, but had no wheels to create a breakaway. A speedless Chimmer is a fringe NHL player. I'm not sure if it is a confidence issue, or still a nagging injury. He looked no better tonight than he did in his last return. I'll give him some slack for it being related to conditioning, but if that's the case let him air it out some more in practice and dress a healthy body like Dorse or Murray.

I didn't think our lineup was Weighty enough tonight. Murray is a forgettable, but valuable player. Having Peca, Chimmer, and Voracek all on the bottom six loses a lot of grit.

Mancrush: Nasher. I can't wait to see him in the playoffs. He has always played well under the spotlight. He thrives. He ties the franchise record in points for a season. Hopefully he adds 5-6 more to that total before the year is over.

Whippin on Rimer and Gare. These guys sucked tonight. I usually don't like to go that strongly, but they were awful. The homerism was off the charts. It is usually about a 9.5 on the 10 point homer scale, but tonight was about a 15. Whether it be the joking about getting a gift call on the Umberger high stick or the whining Tyutin call in the final minute. Just call the game guys. Educate the fans. You are getting all time high ratings, use that to help nurture those casual fans rather than bellyaching. Let the fans do the cheering. Do your job.