Share All sharing options for: Columbus vs. Detroit Preview 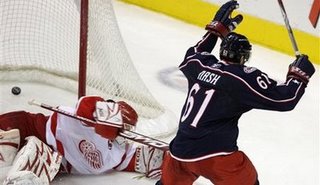 Rick Nash could not be too upset to get the Red Wings in the first round. He has delievered goals against the Winged Wheel, including two hat tricks this year.

In our two most recent meetings, we pounded Detroit 8-2 in the Joe in what could be the best CBJ victory of all time. He mercilessly beat them. We created turnovers, we capitalized on our chances... they did not look like the Wings. Detroit answered back with a decisive 4-0 win in the Nat. They were playing to send a message and dominated the puck position as they tend to do.

Detroit is a great team, but not as great as teams past. Remember when they skated out Yzerman, Fedorov, Shanahan, Hull, and then young pups Zetterberg and Datysuk. They can make a push to challenge those top four, but they are without the youthful punch.

It doesn't need to be said that they are dangerous on offense, they are also a little fiestier than they used to be.

How do you beat them?

The one part of the Wings game that is vulnearable this year is their goaltending. We have to get to the goalie who is likely to be Chris Osgood. Through their goalie we might be able to puncture some of that confidence.

Playing from behind against the Wings is not what we need to do. We are one penalty away from being down 2 instead of down 1. This leads to number 2.

2) Stay out of the box. The Wings have had the best powerplay in the league for nearly a decade. Tomas Holmstrom has bought a nice house off of the Wings PP. They will trot out two units without much drop off. The first unit is complete skill, the second unit is hungry. There is no good solution to try to stop the unit. If I say key on Rafalski, then Datysuk is on the half wall... Positionally strong, and winning puck battles. Max effort.

Do not take penalties in the second period, because you are almost asking your PK guys to take a 2 minute shift.

3) Smart, physical play. We have to play religious Ken Hitchcock hockey and get the puck deep and check hard. Do not check for punishment, check for the puck, or both. If we can make the Wings carry the puck goal line to goal line, and backcheck strong, we will limit their scoring chances. We cannot afford neutral zone turnovers or bad dumps. The Wings defense will quickly move the puck up ice quickly if they can get to it. We have to go through the neutral zone with speed.

4) Buy a Powerplay. If they Wings turn up their team defense, goals may be harder to come by. We have to score on the Powerplay. I don't want to beat this drum any harder. The Wings do not have a great PK. Just a couple dirty, lucky goals can go a long way.

Here are the 4 Jacks we need to win.

Jack of Spades (Hard Work Jacket) - > Raffi Torres. He has played clutch this year, but we has more to offer. He has to be a strong player on the boards for us. He needs to create goals, not just finish nice passes.

Jack of Hearts (Clutch Jacket) - > Rick Nash. If we ever need a big series from him it is now. He has proven to be clutch in his short hockey career. He has to be our best player.

Jack of Clubs (Physical Jacket) - > Mike Commodore. He has to carry the club. He will be going into the corner with some of the best players in the world. He has to break them down. This does not mean wildly trying to take someone's head off and getting himself vastly out of position. He has to be smart about it.

Jack of Diamonds (Star Jacket) -> Steve Mason. This is not a surprise, if Mason has a bad series we will not win. If Mason had a bad season we would not be in the playoffs.

In your mind, who are the keys to success against Detroit? FIRE Away.