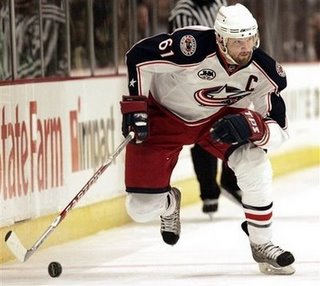 Have you ever watched two tortoises fight?

This was a very plodding, trudging, grinding game if there ever was one. Unless you are a fan of attempted cycles and blocked passes, this one was a tough one to watch. The entire game seemed to be played in mud. On either end of the ice there was not much happening. Outside of the Nash-Huselius (Huselius's 20th post of the year), and Williams on a rush, there wasn't much Jacket offense tonight.

I'm not sure we saw a player at top speed with the puck the entire game.

Thank god for Raffi Torres. Say what you will about Raffi, but he has scored some clutch goals for us this year. Huselius made a beautiful pass on the first one. Vokoum would probably like to have the second one back. I was on his case when he was coming back from injury. I'll gladly eat my crow because I was excited about him when we picked him up.

To be honest this was the first game I've seen the Panthers this year. All year I've wondered how in the world with their lineup they've contended. I figured out the answer. They play defense and the East can't handle it. It is the same reason we have dominated the East. Thankfully we have more offensive players than Florida.

This was the first subpar game from Vermette tonight, but of course he caps it with an empty netter. He didn't play badly, he just seemed invisible. Umberger as well.

Our defense did a great job of controlling their players all night long. Outside of one breakdown by Commodore and Hejda, there were not many chances allowed. Recent whipping boy Klesla lead all players in ice time. Give the guy a chance to get back into the game.

Mancrush: It has to be Raffi tonight. Not just one clutch goal, but two. The game was won on his stick. This could have easily been a frustrating, lulling loss. He pulled out the two points and will give us that much more breathing room.

Whipping Boy: Half Court Offense. We have a hard time with it 5 on 5 AND the powerplay. We've got to be able to get some players open in scoring areas. We have to generate some shots through from the points. Otherwise we might as well roll 45 seconds off of the clock. This would be my challenge to our coaches. Improve our offense when the d is set up.

They say a mark of a good team is winning games when you are not your best and we have won a few lately when we did not have a our "B" game. This is a great sign.

By my projects we need FOUR MORE WINS to grab a playoff spot. We are 7.5 points up on most of the field from the outside looking in. With the win we move only 3 points behind the fading Blackhawks. The Canucks are starting a 6 game roadie. I'd crap my pants if we finished in 4th.

In the spirit of the NCAA Tournament, only the last 3 minutes matter.