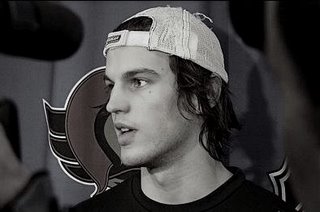 On a lot of levels this deal makes a ton of sense. Vermette is a scoring line player, who has untapped potential. He also will fit into the Hitch system which is a rare mix. On the bright side, this could be an amazing good fit. If there is downside, we have a year to make a decision to see if he is a longterm fit with this team. I think if he meshes well, we will have the pieces to make a darkhorse cup run. There are a lot of great teams in the west, but I think we can knock off a good one in round number one. I've been driving the Vermette train for about 3 years running now, and I'm really excited to have him in the fold now.

His versatility is the most attractive feature. He can play all situations and all forward positions at about the same level. Between he and Umberger we should have a very versatile top 6 for this year and next year.

The Price: Pascal and a 2nd. My first gut reaction was that I imagined what this trade would have been at the beginning of the year. I think it could have probably been Pazzy for Vermette straight up. We probably would have jumped all over that if we knew what Mason would walk in and due. We are selling Pazzy at low value, but I think the 2nd is more to even out the final year of Pazzy's deal. 4.8 is a lot of dough for Pazzy that we will now be able to reinvest. There are health concerns with Pazzy that I feel are overblown, but I do feel we did overpay for this deal. This is what happens at the deadline though, buyers will overpay. At the end of the day we got the player we wanted without touching the roster.

We will all miss Pazzy and his personality. I'll be rooting for him to be successful. With the talent on that Ottawa team, I'd expect them to make a quick turnaround next year.

is a pretty good healthy top 9 for us. Next year slide Malhotra down into Williams spot and put Brassard on the top line, yowza.

Not to be overlooked picking up Kevin Lalande for a 4th round pick seems at the surface to be interesting. I'm not going to pretend I know anything about Lalande, but we I can infer is that he's highly thought of in his limited playing time. For a backup AHL goalie to land a 4th round pick, there is obviously some buzz there. I trust our scouts on goalies, we've picked some good ones. Calgary has tremendous goaltending depth, so this could be a under the radar move that can certainly stabilize the net in Syracuse.

It sure is fun to be a buyer. Last year's deadline was the most depressing for me in history, because we went in with hopes of being a buyer and came out a seller. In the long run, it was probably the best move we could have made.

Grade Scottie Howson... What do you think?