Share All sharing options for: We'll See You Tomorrow 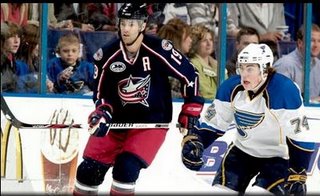 I'm not sure what was on Oshie's mind as he left the penalty box. He ignored his left point responsiblity and went across the ice to line up Nash. It was a good hit, but I'm not sure what the point was. It sure woke us up. Good thing to so we could steal a point from them. I really was hoping after that hit we'd take two in regulation. A SO loss does leave me empty tonight. Each point matters. Especially this team of the year.

I can't wait until we pick the lines against Oshie tomorrow. Be ready for a healthy dose of punishment.

Nash responded with a goal. It was a one man stick handle exhibition. He continues to lead the team into the playoffs.

Huselius played his best game in some time. The puck was a cemented to his stick. He got 7 shots on net and popped one in. He has been as advertised. Some nights incredible, others invisible, but I think he's lived up to my expectations.

The Umberger-Vermette PK duo has been gold. We finally got to see Vermette's wheels on display. His first 5 steps are dynamite. He created a breakaway out of nothing. The pair has really been good. I hoped they would let them develop some chemistry and Hitch has. They both are straight line quick and creative players.

Klesla missed most all of the third period. I'm not sure if he was injured or if he was on punishment. Neither would be surprising because he did not play well to start the game. If it is indeed an injury this will be a year to forget for Rusty. He can't get himself if into any rhythem if he misses 5 for every 5 he plays.

Mason kept us in this one when we were down two. I'm sure he'd like the have the second goal back. Giving leads on goals like that never is fun.

Russell has turned into a little wolverine for better or worse. He follows up his 10 minute misconduct by being the first responder to the Oshie hit. It is nice to see a little fire from him, but he really needs to keep the gloves on.

We weren't able to roll four lines tonight, for whatever reason. Murray and Dorse barely got 5 minutes of ice time.

Mancrush tonight: Hejda's butt. That is by far the most valuable backside on the team. It separates, it hits, it just gets in the opponents way. I thought he played a pretty good game tonight and he made a lot of little plays that just never show up. He's also on a career high 3 game point streak.

Whippin' on Klesla tonight. He's my dude, but we need consistency. If it is an injury issue then that is one thing, but we need more.

Overall the two goal third period comeback earned us a point and you can't be too dissatisfied by that on the road. Hit the comments, FIRE away.