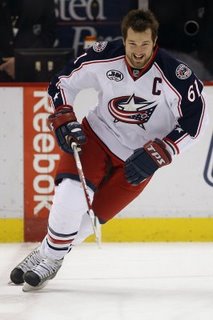 Cause and effect relationships.

If only we were able to add Antoinne Vermette 9 years ago... I'm kidding of course, but this was probably the most fun I've ever had watching a CBJ game. We simply thumped the Wings. We needed to.

All aspects of the game were strong. Special teams must be good when you play Detroit, and they were. You must capitalize on your scoring chances, we did. Our effort was in unison tonight. In the past few weeks we looked disjointed. Not so, tonight, everyone put it out there, everything flowed together.

The reality is this team is completely different when they get on the scoreboard first and early. When that happens we play very good, strong games. When that doesn't happen it seems we might grip the sticks to hard or get deflated after the opponent scores on us. We will not score first every night, we will need to get over this.

To the new guy. Vermette impressed me tonight. He made a lot of really solid plays. He will help us. He adds another threat on the ice for us. He adds scoring depth. He was a strong penalty killer tonight and strong in the circle. We didn't get to see the offensive flare tonight, but I'm sure we will. Very satisfied with his play today.

Another strong performer for me tonight was Chris Gratton. He seems to make strong keep ins. He continues possession and battles well along the boards. He will be the ideal fourth line center moving forward. I honestly thought we missed him in the lineup against Nashville. I like his game over Peca's to be honest.

Rick Nash's and his unassisted hat trick is the third player I'm mentioning. That signifies a great, great game. I'm not sure I've ever seen an unassisted hattie. When he gets blank ice in front of him, Nasher always finds that extra gear. All three of his goals were on pretty wicked shots. Sometimes they go in.

Klesla looked pretty strong in his return. I'm happy to have him back. I was growing tired of the Methot, Backman, Rome revolving door. None of these guys are consistent enough to play top 4 minutes. While he has his critics, Klesla plays a simple steady top four game. He is also beastly on the PK, which should really help us down the stretch.

Umberger continues his very strong play. He has really delivered what I hoped for. He has proven to be a consistent score, which was a concern of mine when we traded for him. I was skeptically if his numbers were inflated by playing with a lot of high quality guys in Philly. He has put up very strong night with a seemingly revolving door of linemates. I really like the Umberger - Vermette - Williams line tonight. That could be the best second line we've ever iced.

I should at least mention Mason and his 42 saves. He looked pretty strong tonight. He had no chance on the first goal and the second was a deflection. He was very good tonight.

Our defense played a really strong game against Detroit's best players. They got the second change so we always didn't get the matchups, but this is the value Klesla brings IMO, you can roll out either pair against the Z line and not see a difference.

Mancrush of the Night: Antoinne Vermette, this is a mancrush award 2 years in the making. I like the 50 too. Hopefully he owns that number so I can get it sown on my blank jersey.

Whipping Boy of the Night: Voracek, he was only even on the night and registered 0 shots. Bum. Boller and Dorse are going to make sure he hears about it. :-)

If we get into the playoffs you have to love our chances in the first round because we always tend to get up for games against the best teams. We will be the underdog in round one. I do not think there are many teams that would want to see us in round one.

So an 8-2 win against the Wings in the Joe.... did you ever think we would see the day. Somewhere Serge Aubin is smiling.