Share All sharing options for: Tilting the Ice and......Controversy? 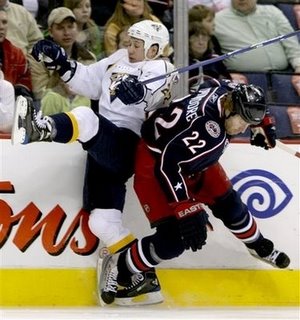 If Time of Possession decided hockey games, this could have been the biggest blowout in Blue Jackets history. The Jackets dominated possession and spent most of the time in the Nashville zone. Since when did Nashville got so docile? They use to check ferociously. Not much fire from them tonight. Especially after the Dumont hit.

The boys wanted it tonight, they wanted it bad. They earned it and got the well needed bubble room in the standings. The two losses shrunk up the cushion. A third would have caused the entire city of Columbus to menstrate. (No offense Lady Jackets)

Here comes the controversy. Prepare Yourself.

I believe there was unmentioned cheating by the Preds in the 3rd. Sullivan had matching minors with Vermette, and Hornqvist got goalie interference giving us the PP. Here's the problem: Sullivan left the box instead of Hornqvist at the expiration of the penalty. Sullivan then was able to carry in the zone and create offense. The officials BLEW this one. CORRECT me if I'm wrong. Good thing it didn't amount to anything. Vermette was stuck in the box for another 2 minutes waiting for a stoppage.

The PK was huge in the 3rd when they needed to be.

The Boll - Peca - Torres line was a very effective line tonight. All of our lines looked great tonight actually, but Peca's was probably the best one. They dominated possession. Raffi "Clutch" Torres has the magic stick. Boll took a bruising slapshot. He's a warrior. We needed the clear and it was a big day.

The reuniting of the Vermette - Umberger - Williams line gave each of the guys a little extra jump. I'm not sure I'd touch that line. They were great when they were together, but were separated to generate more scoring. Irony? Umberger's goal was huge. It would have been depressing to dominate the Preds and go into the locker room down 1-0.

The defense was superb tonight. The puck was moved out of our end swiftly at each opportunity. Nashville did not have much of a forecheck, but that could be a combination of strong puck movement. I'd at least expect a team of youngsters to be tough on the forecheck. It wasn't happening for them tonight.

Russell was amazing. He needs to get a goal.

Mason was great tonight and tacked on another highlight reel save. He made the saves when he needed to make them tonight. He won't make those saves every night, but it needs to be remembered that he can't be expected to make some of those all the time.

Mancrush: 4 high quality lines tonight. All four lines had at least 2 dominating shifts. That is rare. Every line created scoring chances. The pressure was constant. These lines should not be touched for the next game.

Whippin on the officials for that blown call. No way can Sullivan leave the box in that situation. He could have been sprung on a breakaway.

FIRE away at the comments. Let me know if I'm wrong.