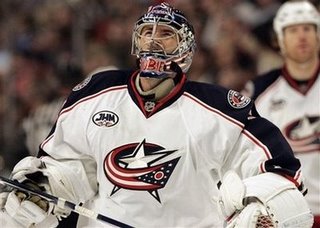 Who wants to play us right now?

Second night of a heart pounding back to back. The Jackets brought their game to Chicago. Outside of the first ten minutes to the second period, we owned the game.

Right now, roster for roster player for player, we are a better team than Chicago. Their blueline is more mobile, but count the odd man rushes we got in this game.

It should be noted we have PASSED our ENTIRE goal output from last season with 194 goals. The team still needs some offense and a PP, WHAT in the world did we have last year? While we have been critical of the offense at times this year, it is leaps and bounds better. Our skill level is just higher. If we were middle of the pack PP, we'd be past the Hawks in the standings.

Huselius, what a dirty goal. It put us up 2-0. He was buzzing all night, I thought he was one of our more visible offensive players.

The Vermette mancrush grows. He pots two for us tonight. The first of which has to make Hitch smile. Going to the dirty areas to find a rebound. This guy could be the missing piece for us. Imagine trotting out the Chimera - Brassard - Voracek line with the current top six we have going. Think about that offensive depth for a little bit.

Big salute to Dubie. We needed a big performance from him and he did not disappoint. He made the saves when he had to. His performance gave me a lot more confidence in our goaltending down the stretch.

Raffi, stop with the little cute blind back passes and you've won over my heart. He seriously made a drop pass from behind our own goal-line to a player on the blueline. Please never do that again. I can't argue with his touch around the net right now. I liked the Brule trade a lot when it happened. Didn't like it for a while. Starting to like it again.

Besides making it a little too interesting with a couple late penalties. I thought we played a pretty good game. I thought the PK was pretty good considering giving up two goals. It is funny how that works out sometimes.

Who can beat Rick Nash in a loose puck race with nobody in the way of the goalie?

Mancrush of the Game : Although I could probably put Vermette here for a fourth straight game, I'm giving the nod to Voracek. A brilliant game from the youngster. His vision on the Huselius goal was amazing, the pass was exactly where it had to be. He added two other helpers. His puck protection was great. You win with players like this. He'll only get better.

Whipping Boy: These Wild Momentum Swings. Hitch did put his foot on the throat of it tonight, with the TO, but they need to come to an end. Even if we play a great 55 minutes, a bad 5 can lose a game. Credit to the Hawks, they are a good team, but we still need to be able to get the puck deep and grind away a couple of shifts after a goal.

Look at the pipeline, if we make it in the playoffs, we won't be leaving for a long time.