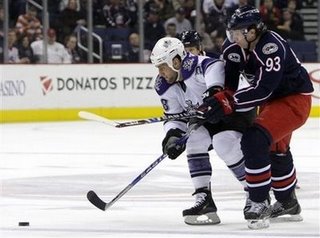 A pathetic two minute stretch really put a damper on this evening. The team has shown resilency this year... inconsistently. We had it tonight. We got a much needed two points, so at the end of the day... all is well.

Mason would love to have 2 or 3 of those goals back. As the season has moved on, he has started to look more and more human. He let in his first really bad one today on a backhanded bouncing puck. I know we have rode him for the last 5 months, but we do need more consistent play out of Mase. He usually can shake off goals, but for the first time I think we say him rattled.

Manny Malhotra played an amazing game. 2 goals on the books, Raffi made a soft tip on another. He could have had a hattie. Manny has shown he can be a solid player for stretches. Honestly isn't that about the same as Nash and Huselius? You could argue that Manny puts it out there every night though with his contribution. He's busting every shift, and always helping on the faceoff dot and on the PK. It will be interesting to see how we plays down the stretch for us.

I was on Raffi for a couple weeks, but he is really skating much better now. Injuries do take time to get back into it. He's making better plays and you can start to see the potential he brings to this team.

Voracek was pushing really hard all night long and was rewarded with an early dirty goal. When he is skating he looks so much like Forsberg that it is scary. After witnessing the one year improvement of Brassard this year, Voracek could be scary next year.

Aaron Rome has continued his solid play. If Methot didn't take his chance and run with it early this year, we would have seen Romer a lot earlier. He played a really solid positional game for me tonight.

The minutes were spread out a lot better tonight. This is a good thing for the team. I think Nash is a great 19 minute player, but he simply gets worn out when he has to play 21-22 a game. Spreading the minutes will certainly pay its dividends down the stretch, hopefully we continue to get consistent four line play.

In it's only appearance, the powerplay looked good. We needed it on the road.

Mancrush of the Game: Manny played beastly. That is why he is a former HF Mancrush Award Winner. Manny laying on the puck for the final 5 seconds was great.

Whipping Boy: Tonight it was Mase. He let in two really bad ones. He also made the game a little too interesting with a bad dealy of game penalty.

In other news it was announced that Chimmer would need surgery and he'd be down for 5 weeks. My take, it is better to get this guy healthy. He is a mediocre at best player without his speed. His speed creates space and pressures the defense. He needs to be healthy to play his game. Since this is his first groin injury part of it is probably psychological also. It is nice to hear that he'll be out for 5 weeks, because in Jackets seasons past this would have been termed "Out for the Season."