Just a quick look at some of the new records that have been achieved, both individual and team records:

With the win last night over Chicago, the Blue Jackets reached 80 points on the season. The Jackets next point will be a new franchise record. The Jackets have a new high for wins in a season with 37 so far. With this, they are on pace to finish above .500 for the first time in franchise history. The Jacketsâ•˙ current win percentage is .563. They are on track to set new highs both at home and on the road. Rick Nashâ•˙s 33 assists are a new personal best. Nash's previous high was 31, which he achieved last year. He is three points away from establishing a personal best in points -- he currently has 67 points. He is also on track for his best +/- with +10, with his previous best of +2 in 2007-08. Nash has also surpassed David Vyborny as the career franchise leader in points. Vybornyâ•˙s record was 317 points, Nash is currently at 343. 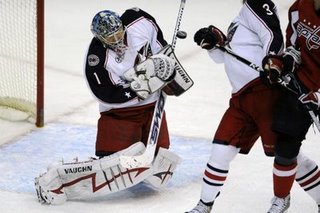 Steve Mason, the rookie sensation in goal already has multiple Blue Jackets records at just 20 years of age. He is tied with former Jackets goalie Pascal Leclaire for most shutouts in a season with 9. He has the most wins in franchise history with 29. The longest shutout streak belongs to Mason with 199:19 of no goals against. He is currently tied with or very close to Jackets records in save percentage and goals against average(2.25 GAA, .918 Sv.%). 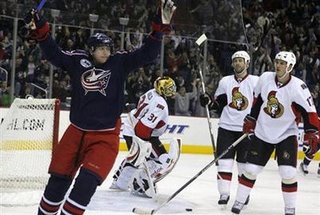 Jake Voracek is on pace to set a new CBJ record for most points by a rookie. The current record belongs to Nash with 39 points in his rookie year. Voracek has 9 goals and 26 assists for 35 points, and is on pace to end the season with 10-30-40.

RJ Umberger has a new personal best for goals with 24. 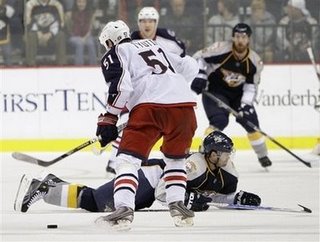 And as we all know, the 19,167 fans that saw the Jackets top the Penguins in a shootout last Thursday is the largest crowd ever in Nationwide.

Any cool records I missed or that youâ•˙d like to point out? And which new or potential record is the most surprising to you?