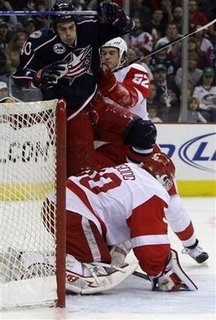 Scoring chances tonight were few and far between and it resulted in a 4-0 loss to Detroit.

Detroit played a good game. We were smoothered defensively and we could not stop their offensive pressure. It was not a pretty game, but at least it didn't reach blowout status. Detroit is a good team. One 8-2 win will not change that. The seemed to plug tonight rather than bedazzle with skill. They played more of our game.

We started this game about as badly as you could. We first got a gift on a no-goal call off of Holmstrom. That was a clean goal in my opinion. We then proceeded to give up a powerplay followed by a 2 minute 5 on 3. This is how Detroit wins so many games. They put teams down early with an effective Powerplay. We played right into their hands tonight and were playing from behind all night.

On one hand, we all knew the win streak would end soon. We beat four high quality opponents. Now it is time to start another streak.

I'll keep it short tonight. I didn't feel like we had players that necessarily stood out that much. It was truly a team effort.

Whipping Boy: The Powerplay. We had our chances to get back into the game with some early powerplays and it just didn't happen. We lost loose pucks. We were cleared out easily. We stood with the puck looking for something to happen... Not a good unit tonight.

Wednesday on the docket. Start a new streak.

Hit the comments, fire away.