My Email to Scott Howson

Share All sharing options for: My Email to Scott Howson 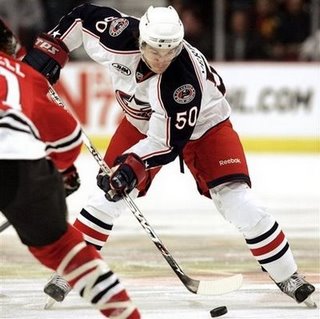 For an amusing stroll down memory lane...

First let me make this clear. I like ALL of the moves you have made thus far. I think many holes have been plugged with younger talent than I expected (i.e. Tyutin and Umberger). Iâ•˙d also like to thank you for being aggressive in the Redden, Richards, and Jokinen talks because it assures me you are in on the action.

So I 150% believe that you have sought out Antoine Vermette.

I think this guy is the absolute most perfect fit in the NHL for this team, in this system. To be honest going into the offseason, I was expecting an additional top six forward and now we seem settled into giving Brassard the reins. I was at the prospect camp, he was a man among boys, very impressive. Brule was impressive before, Fritsche was impressive before. Considering his 17 games of NHL experience, injury history, and lack of faceoff skills I am not sold on him solidifying our top 6. Letâ•˙s just say I am jaded counting on young players. If Brassard falters we are looking at Peca/Novotny/Malhotra as our second line centerâ•œ this has been one of our major problems since our inception.

I think Umberger will make a good transition back to center, but even he hasnâ•˙t played much center lately and certainly not on a scoring line. This all leads me to Vermette.

I know I am not privy to much information, but it seems he is available because he wants a long term commitment the Sens do not want to give him. This guy would give us 2 top 6 centers. Heâ•˙d also be a playmaking center we can count on to win faceoffs (not since Andrew Cassels have we had that). This would help our PP so much in my opinion. It seems like the first 15 seconds of every Rick Nash shift is Nasher on defense. We need offensive players on the ice with strong faceoff men. Vermette is both. He is young. He would fit into our building core and by reports, wouldnâ•˙t command an unrealistic salary.

By my count weâ•˙d have 7 million dollars off of next yearâ•˙s payroll. This is the only year heâ•˙d break any kind of budget. Our 2009 1st rounder, is a player that may not help us until 2014 and I feel like our fanbase needs the playoffs now. With the current roster, there are a lot of ifs and it will be a dogfight for the 7th and 8th playoff spot. Rather than being in the mixâ•œ I want to be a clear cut team. An acquisition like this would help immensely in that regard. Then imagine Brassard asserts himself, Voracek asserts himself. We would have an enormous amount of scoring depth and plenty of â•˛bulletsâ•ˇ Iâ•˙m sure you know all this and have done diligence to acquire him.

I want the best shot to make the playoffs and I donâ•˙t feel like we have that team right now. I understand the Sens may not want our picks and futures, but someone will. Three team trades are under utilized in the NHL. I hope youâ•˙ve sought out these options and I trust that you have. I understand high asking prices, but I know homeowners usually come down after awhile. Please stay on it.

If we get a top 6 center like Vermette send me a reply, I convince my wife to let me buy season tickets, I promise.

Thanks for reading my plea for Vermette,