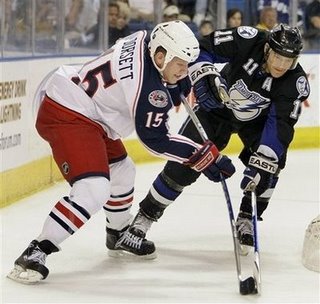 Well at least we got a point. Hopefully this will serve as a wakeup call for us. Tampa had no business being in this game. Until the final 10 minutes they didn't show a semblance of offense.

For years I have had an ongoing fight. When our team has not scored goals, I argued it was not a matter of having goal scoring, but we need to improve our play in transition and defense and that it would translate to offense. A game like this makes that obvious to me... after watching the Lightning. A team on home ice that has the offensive skill of Lecavalier, St. Louis, Stamkos, Prospal, Malone.... did not generate much offense.

Our 3rd period fire created our first goal. We were able to tip the ice, we really overwhelmed Tampa with our pressure, we would inevitably get one in. It sure does feel nice to be on the other side of this.

Who knows why we didn't continue this play. When we pressured Tampa we created chances, but we didn't do it enough. We paid for it.

I thought Kris Russell played his best game in a while. He had some jump and created a lot of offense. He made a lot of smart pinches.

I've actually liked what I have seen from the Nash - Williams - Huselius line. The past two games they have really given some offensive jump. I wouldn't be surprised to see us roll it out to start a game. We need consistency from our top line

I'll give some big props to our energy guys tonight. Dorsett, Boll, and Murray all threw their bodies around tonight. It is a lot to ask, but we need this from this every night. That is their role.

Mancrush of the Game: the D. Tampa was stiffled for most of the night. They could not get much of anything going 5 on 5 and this has to be a big credit to our d because they do have a ton of offensive player.

Whipping Boy: Inconsistent effort. We really came out strong in the third, but we didn't see this earlier and we didn't see it in the end. Once Tampa got the PP goal, they carried the play against us. We needed to be able to match that.

Hit the comments with the thoughts tonight. A let down? Lucky to get a point? I was happy with the play until the PP goal. While we didn't create a lot of chances we did stuff all of their offense through 50 minutes.