Share All sharing options for: Jackets Sting the B's 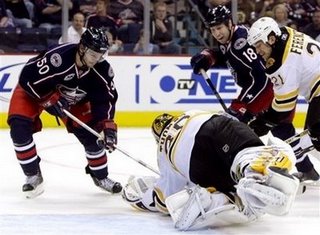 Hopefully the title does not bring back repressed memories of team name confusion.

The Bruins are a great team. They do everything well. They play all three zones very well. They move the puck out of their zone quick, they pressure and create offense and get good goaltending. This is by far the best Eastern team I have seen. Fortunately Kessel came back after what appeared to be a possible shoulder dislocation. I was a B's fan before the Jackets came to town. I hope to see them in the Cup this year (Although the City of Boston is getting a little too annoyingly successful).

We beat them. We did not look overmatched. We shut them out.

Vermette got his second point in his second game. He really adds a lot to the team. He used his speed well and created offense tonight. I think he and Umberger can mesh really well for us. They play similar downhill styles and they both have offensive creativity. I hope that they are paired for a while to develop some chemistry.

Mase is back. When Mase is playing really well, it doesn't look like he is playing hard at all. He was on tonight. He saw all the pucks, he was positionally strong, he made all the saves. As Mase goes, so goes the Jackets. That's about the same story for most of the teams in the NHL.

Raffi has been on a shooting spree. We are finally able to see what type of player he can be for us. I'd actually like to see more physical play for us, but right now I'm satisfied. When he is scoring consistently that is good news because this team has struggled with secondary scoring for.... ever.

Voracek played a strong game tonight. His quality of ice time will be down, but he is a puck control hog. I can't imagine how much better his board play and puck control is when he puts on 15-20 pounds.

The defense played really strong, safe hockey tonight. Just the way Hitch likes it. I thought Klesla played another really strong game. Having two capable shutdown pairs really helps against teams with the type of offensive depth as the B's.

An honorable mention tonight to Jiri Novotny. He is a "get in the way" type of player. Good and bad. The last two nights have been very good. He has laid the body religiously and really has gotten under everyone's skin.

Mancrush of the Game: I really liked the Umberger-Vermette pair. I thought they threatened all night and played really sound defensive hockey. The best second line we've ever had. Better than most first lines of CBJ yesteryear.

Whipping Boy of the Game: There were no passengers tonight. Special Teams played solid. A near flawless Hitchcock game.

This was a huge win. That Nat sounded great tonight. I think we'll see the benefits of this one in the standings tomorrow. We might get some additional space with all the games on the docket tonight.