Share All sharing options for: Gotta Love the OT Cannon! 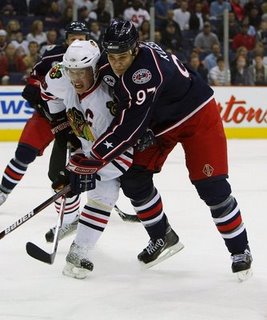 I'll never complain about an entertaining hockey game. That was a good one. The OT Winner makes it even sweeter. I would have loved to have taken the point from the Hawks, but realistically we probably won't get up to match them. The win is clutch because a loss would freak out the scoreboard watchers.

A great ending to a pretty solid heavy game.

What are with these starts that we've had over the last month? We don't always give a goal like tonight, but it seems like our opponent has been able to hem us in the zone. I long for the days when we "felt each other out" for about 5 minutes. We have responded a whole lot better than any other time in our history. You used to be able to chalk up a goal like that in the loss column. We have proven we can score goals.

Nash was possessed tonight. He was buzzing all night long. This dude wants to bring the playoffs to Columbus. He had about 4 pretty good scoring chances, but scored on a whimpy, waffling wrister from a bad angle. Go figure.

A bad night for Tyutin. He spent as much time on ice as he did in the box for the first two periods. A lot of minors and he made a bad play on the first rush. I've really grown to like his play this year. He's been our best defender IMO. Tonight was an off-night.

What in the heck was the diving call on Boll? I appreciated the two straight minutes of booing from the Nat. That was a ridiculous call. You could take both of them I guess, but in no way only give him the dive. That was a bad call. In regards to Boll I felt he was pretty invisible. A player like him cannot be invisible because then he isn't adding much to the team. He HAS to play physical. No questions.

I liked Dorsett's game tonight. His goal was on a nice rebound and he really set up a nice chance for Murray in the third. He has made this play a few times when on the rush with a player, it is his quickness that lets him create the opportunity. He wants to stay in the lineup. I liked him over Boller.

Vermette was pretty quiet.... until he scores the GWG in OT. Umberger made a beautiful saucer pass. This was not a CBJ goal of the past. There is so much skill on display on that play on both parts. That is from our current second liners. Thank you Scott Howson.

This was a scrappy game. We didn't get great play out of a lot of our guys, but we got solid play. We stayed in it and was really competitive all night long.

Mancrush of the Game: The gutsy Third Period PK. Body were flying. A couple of our guys were diving face first to block shot attempts. These guys want to win so bad. If a puck went in, it could have been a loss. A frustrating loss. This is a team you can be proud of. This is a team that will wrap the city into a frenzy.

I would love to see the TV people hit the airwaves with some new commercials. One the Hawks feed from the other night, they had some pretty cool backlit spots with their players skating to a microphone. We need something.

A pretty cool setting with Rick Nash speaking to a camera, "I'm Rick Nash, Come see me play, I won't quit" would be freaking tight. Get a series of them set and blast the commercials. Columbus is craving to embrace this team. This is the time to get the CASUALS, not one dollar dog night against the Thrashers in October.

Whipping Boy: The start. We've got to fix this, before it becomes psychological. It might be already. At least we know we will score.

So what would you be willing to do for playoff tickets? Hit the comments, be creative. The most creative answer will receive a authentic ticket request endorsement from the Cannon.