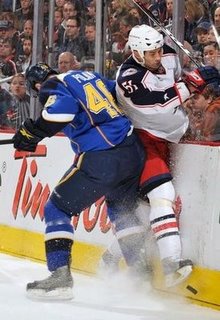 This game will drive bi-polar fans into a frenzy. It does seem to hurt in the standings, but this speaks to the competitiveness of this race. St. Louis brought "it". They played our game better than we did in both games this weekend. We did have chances to win this game, we just didn't get the goals early.

When the game was 2-1 it had a next goal wins feel, and that's what happened. Perron capitilazed on a broken play against our top unit. That put us away tonight.

Mason did not play his best game. His giveaway was awful and unacceptable, but he knows this. I think it hung with him a little tonight. Our guys didn't respond like we have on other incidents with a goal.

Commodore and Hejda did not play a great game. I'm not sure what Hejda was trying to do on the first goal. He usually does a great job playing the puck, but he went for a check and totally whiffed at our blueline. Not a good sign.

Overall we didn't do a great job at our game. The last 10 minutes were pitiful. We didn't get the puck deep in the third period. We made bad giveaway late. Legs and energy cannot be an excuse at this time of the year. The Blues are tired too. Everyone is tired. The execution just wasn't there tonight. This is where an average PP would do wonders for us. Some night it just might not happen 5 on 5 without the legs.

Nash played a pretty solid game. He drew penalties, he scored. He got the worse of a contact from Oshie. He has been what we have need from our captain down the stretch. The challenge is now on Umberger, Huselius, and Voracek to pick up the scoring. Voracek plays solid games, but does not often find himself in great scoring chances.

Some offensive contribution from Boll, Dorsett, Peca, Murray would be welcomed.

Mancrush tonight was Nash. He is showing positive signs for us down the stretch, willing us into the playoffs, the team just didn't get it done tonight.

Whippin on Hejda and Commie tonight. These guys need to be the shutdown guys we've relied on all season. We can't afford bad nights from them and tonight was a rough night for them. There were many candidates for this tonight.

So how important is the Nashville game? FIRE Away