A Case for the Calder

Share All sharing options for: A Case for the Calder 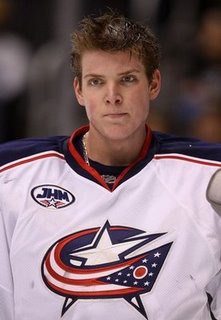 There has been a lot of talk lately about who is most deserving of the Calder trophy, an award given each year to the best rookie in the NHL. There have been a few different names bandied about; early in the season it seemed to be a race between Derick Brassard and Kris Versteeg, before Brass' season ended early with a shoulder injury. Versteeg has cooled of late, and in their place players like Bobby Ryan and James Neal have moved to the forefront. However, the one player who has consistently been in the race for the Calder has been goaltender Steve Mason.

He didn't start the season with the Jackets, in fact he was injured to start the season. After recovering from off-season surgery, Mase played three games for Syracuse of the AHL, before earning a callup to the Jackets in place of the since-traded Pascal Leclaire. Since being recalled, Mase has been the undisputed number one goalie in Columbus. His rise to prominence allowed the Jackets' brass to trade Leclaire, a former first round pick.

Not only has Mase kept the Jackets in the hunt for their first playoff berth, he has been at or near the top of every goaltender statistical category. Just this evening, Mase defeated the NHL-leading Boston Bruins 2-0, to earn his league best 9th shutout. This was a huge statement, as the opposition goaltender was Tim Thomas, the only goalie in the league with a better goals-against average.

Steve Mason is one of the biggest reasons the Blue Jackets are currently in a playoff spot. Never in their existence have they made the playoffs, nor been in a playoff position this late in the season. If the Jackets can maintain their current level of play, one would think that Steve Mason's heroics between the pipes will get the recognition it deserves, and he is rewarded with the Calder trophy.

Hell, why not the Vezina?