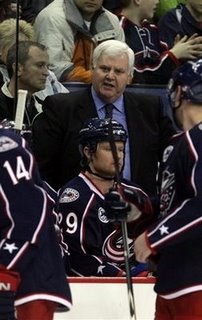 It is an absolute shame we don't play in the same division as the Penguins. The energy in the building was electrifying. Given the proximity, the rivalry could be huge.

On Hitch Night, we could have given the big guy a nice relaxing finish. What's the fun in that though? At least we gave daddy two points.

All things aside, that was a pretty entertaining game. MUCH more entertaining since we won. Although we gave up a 3 goal third period lead, it was fun to watch. Oh to feel something in March. I've waited so long. I cannot even give you a projected top 10 draft pick next year. Tavaras, Hedman... umm maybe another Schenn, another Staal?!?. I like that.


The loss of Mark Methot, put us into disarray with our defensive pairs. Not a good thing against an offensive team like Pittsburgh. Once the cracks began, it just got worse. We could not match up against the Crosby-Malkin combo when they were united. They were truly dominate. Pretty quiet when they were apart.

Antoine Vermette was our best player tonight. With two games worth of trust, Hitch played he, Umberger and Williams against Malkin all night long. He and Williams connected for two nice goals. The assist, he made was pure all-out hustle and skill. The pass from the knees was a new one in CBJ land. The slapper seemed to turn the game into a fun evening, until Pittsburgh poured on their comeback.

To their credit they poured it on. This is a scary team coast to coast. They made more tic-tac-toe passes than any team I've seen on the rush. I have no idea what there problem was earlier in the year, especially when their offense disappeared.

Mason was sick? Dude played out of his mind for us tonight. He made some very clutch saves for us early (another poor slow start) and kept us in it when the momentum had swung. Some huge saves in OT.

Json Williams continues to play very solid hockey for us. Clay and a 6th... um I'd do that one again. He has the scorer's touch. The first true Vyborny-esque backhand in quite some time. I like it.

Nash played real strong all night long, he was huge on the puck and did make plays, even though he didn't find the scoresheet tonight. I thought we were going to pot one in the final 15 seconds mostly off of the work of Nash.

The Juice came up big for us tonight on two nice wristers. He is 19 goals and 39 posts this year. We needed him in the shootout and he got the win for us. Leaving a game up to Malkin is not a good idea.

Mancrush of the Game: Vermette again, he continues to impress me. I was hoping to see him in the shootout, but our three guys have been doing well lately. I think I'll get over the recurring mancrush in a couple of games. Someone will need to unseat the king right now.

Whipping Boy: Klesla is my boy, but he did not play a very strong game. You can see the puck vibrate on his stick tonight. He made some very bad outlet passes and we need more than the default, weak, rims around the boards.

I feel for the older CBJ faithful, I can feel my heart palpitations already. This stretch drive might result in some deaths.