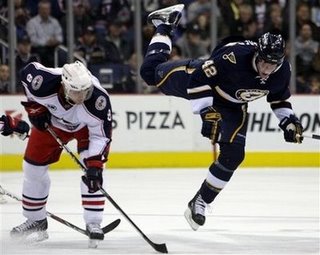 The majority of the game was played in the Blues end of the ice. Time of possession does not equal wins. The Jackets could not get a goal when they needed it and Mason didn't make a save when it was necessary.

The Jackets go as their goaltending goes. This goes all the way back to the franchises inception. A mono-infected Mason is an average at best goalie and we are playing average hockey. I believe this goes along with a weak psyche to put the puck in the net. Outside of the first week of this season I cannot recall a time when I felt we could score 4-5 goals a game. It is games like these that make our complimentary players all look like one dimensional stone hands men.

Mason was average in the little action he saw. He is playing through a disease the puts most people horizontal. That first rebound was a bad one. He has to keep that in.

The Powerplay desperately needs to have a left and right shooting point guy. We keep knocking in one lucky one a game though, so I don't expect to see changes soon. Williams needs to be on the point. He looks much more comfortable back there, although he did goof up the empty netter.

Russell took two awfully big hits in the first period and kept on going. I felt he played a pretty strong game.

Huselius CANNOT pass the puck there at 1:30 of the third. Everyone in the arena assumed he would shoot or make a move, including Rick Nash the recipient of his pass. It was a tough night for the Juice after taking the double minor also.

Mancrush of the Game: The 4 minute PK. It was an impressive kill. If Nash potted the break, we would have two points.

Whipping Boy of the Game: Raffi Torres needs to establish himself.He is a bigger guy who is not great on the boards, tries to make cute plays although he is not a skill guy, and watches his teammates make plays around him. We need more, a lot more. If you aren't adding offense, punish someone with a check.