Not a Good One

Share All sharing options for: Not a Good One 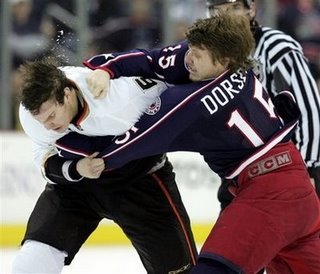 We were fortunate to escape with some wins against teams like St. Louis and Toronto while playing our D game. It didn't happen tonight and it won't happen against good teams. I did feel our overall play was better than it has been recently, BUT we were let down in net tonight...

Mason has seen much better days. The first goal was a long shot, the second was a pass deflected off of Commie, which he still could have stopped. The killer was the wrister from Perry down the right wing to go up 3-1, just after we got on the scoreboard. Perry is a good shooter, but Mase has to make that save. He's won a lot of games for us. Games we shouldn't have won.

We had our chances on the powerplay, we did come away with two goals, but it still felt ineffective tonight. There was a long string of first period PPs that would have tightened it up right away. It just didn't happen.

A couple of the late goals, I felt were the result of aggresive plays from our blueliners in an effort to tighten the game. That will happen. Losing, but 4 or losing by 1, it doesn't matter it was a loss. All things equal I'd like to see us aggressively pushing for late goals, even if it means we surrender an extra tally.

Nash quietly has a 3 game goal scoring streak. He always sneaks up with these little hot streaks. He'll be quiet for 6-7 games, and then hit the sheet for 4-5 in a row. We'd all love more consistency, but I think we can all agree his play is miles better than it was when he seemed to score every game a few years ago. His goal tonight was an impossible angle.

The main disappointment for me was wasting the great Nationwide crowd tonight. I know a few people that got out to the Detroit game last weekend and came away loving the game and the atmosphere. There are few better feelings than a win with 19,000 in the stands, and few worse than a loss with 19,000.

Mancrush of the Game: I'll go with Boll and Dorsett who looked good in all three of their fights. Taking on Parros is not an easy job, but Boller held his own especially after already having one scrap on the night. These guys did mix it up right when it was needed, but the team just couldn't convert that energy.

At the end of the day we've put together a great stretch of hockey. I think the legs were tired tonight, but we have to work through that. I think we got lucky in the past couple games, but we just didn't dodge the bullet tonight.

Two days off before we start our Western Canada Swing. If we can pull out two wins it will be a solid trip.