The Jackets have claimed center Chris Gratton off re-entry waivers from the Tampa Bay Lightning. This is an extremely low-risk move, as the Jackets will only be on the hook for under $200,000.

Gratton is a big body, and is a good penalty killer. His greatest asset at this point in his career is his ability to win key faceoffs. He'll likely suit up as the fourth line center, and could see some time on the powerplay as a "mucker" in front of the opposition goaltender.

To me this spells the end of Jiri Novotny, who after returning from injury, has shown nothing in the way of offense, and hasn't been effective along the boards. Gratton won't supply any more offense, but he will work hard and win battles. 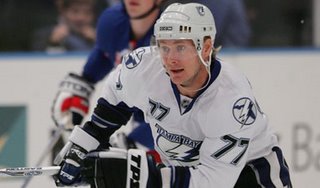