Share All sharing options for: A Lucky, Dirty, Win 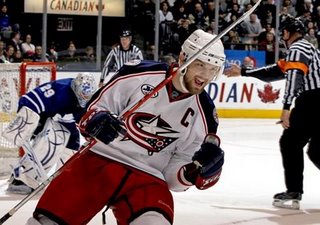 The last 4 periods of CBJ hockey could be described as very very bad; it is hard to argue with the results though. Good teams are able to win games when they do not play well, so there is the positive spin. I'll throw the guys a bone with the workload lately, but every team is tired at this point of the year. We can't play 3 bad periods.

Toronto goaltending won this game for us. Pogge will melt under the Toronto Sun.

Rick Nash played very strong, he always tends to play strong in Canada. His juices ramp up to another level. His last second first period goal saved what was the worst period of hockey in months. He set up the Juice on a pretty pass to tie it up in the third. Finally he clinches the win in the SO. The solution, relocate Nasher's G-Ma to Columbus.

The defensive zone play was bad, some of the worst of the year. We could not make a breakout pass and we were penned in the zone for long periods of time. Mason deserves the big scoop of credit for this one. He kept us in the first, he kept us in the game. I can't count how many times I've said that.

Jason Blake was the best player on the ice. I'm happy for him. If he didn't have such a bad contract, I'd love to add him at the deadline. His contract makes him untradeable. He has a motor that keeps going. All heart.

RJ continues to stay hot. It was a tissue soft goal, but they all count the same at the negotiation table.

We need to get Klesla healthy again, because I do not feel we can march out two effective pairs right now. Backman's play cancels out Tyutin... Since Tyutin is our best defensemen, that says a lot. If Methot has plateau'ed and Backman has come back to earth, I'd consider giving Ole a look. Otherwise hold your breath until Klesla comes back. The lack of a second solid pair has hurt really bad in the last two games.

Mancrush of the Game: Rick Nash, he shows up when the spotlight is on. That is a good sign for the playoffs.

Whipping Boy: Raffi again. I expected a whole lot better from him. His game should be a north-south hard checking game, but he plays this cutsie, drop pass, neutral zone wiggle game that hurts more often than helps. I don't get this. Hitch preaches north-south, Raffi should be a north-south player... does he not listen? In the last couple nights he's had more than one horrible easy clear attempt that he's managed to pen us in the zone with. I digress.

4 points while playing four of our worst periods of hockey all year... sign of a good team or luck?