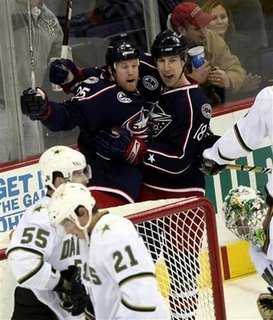 The Jackets pulled out every three button combo they had in the book tonight. It sucks that we lost in a SO in this one. I will not let that minor detail get in the way of a very positive game review.

A lot of days we talk about playing a heavy game. Tonight we played a heavy game. Even the crowd was heavy. Unquestionably the most consistently physical game I have ever seen the Jackets play. We wanted this game.

Also probably the most exciting final minute of regulation. It sure feels great to feel something in February.

40 shots and problem twice that many hits on the scoreboard tonight. Credit to Dallas for being game tonight. The Kolumbus Blue Jackets did dish one fatality tonight to Brad Richards, who left clutching his wrist in a great deal of pain.

Umberger has been on a sesame seed roll for about 3 weeks going now. He was hungry hungry hungry for the trick. Although he has not been the #1 center we pipedreamed him to be, he has been a very very good player. He is perhaps the most competitive person on the team.

Voracek has turned into a big boy. He just needs to score now. His play is rounding out nice and I would like to see him with more ice time. Once the kid puts it altogether he will be a total package. Of all the youngins he is my personal favorite. He reminds me a lot of a young Rick Nash. Neither one of them have a very good shot :-)

The Choo Choo Train has not left the station since he's come back from his groin injury.. I'm not sure if he isn't 100% or if he doesn't trust it yet. There were plenty of chances to see him crank the wheels tonight, but he elected not to.

Mason was again solid. He wasn't tested often and I'm sure would love to have that first goal back.

Mancrush: Crowd at the Nat: My God they were loud tonight. All game long, an incredible performance from the crowd. We need to pack the Nat every night because the guys do feel it.

Whipping Boy: Our 1st Minute: We gave up an awful goal tonight about 30 seconds in. A recurring problem for this team is their play right after the whistle. We don't often let it hit the scoreboard, but we seem to let the other team seize the tempo right away. That has to change. We've dodged too many bullets with our first shift antics.

Definitely the best lost in the history of the franchise. It is good to get a point of this effort, leaving empty handed would be a very empty feeling. Turco got very lucky on two of the SO attempt, but he tends to do that from time to time.

St. Louis and Toronto back to back midweek... whatcha think?