Share All sharing options for: Itâ•˙s a wild ride

Donâ•˙t count the Blue Jackets out.Â In the midst of a three game losing streak, there were rumblings around Columbus that the immediate future wasnâ•˙t looking too bright, but itâ•˙s not over yet. Â 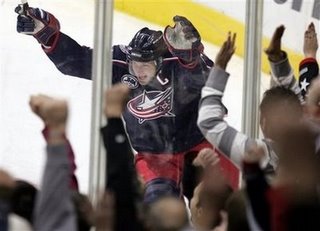 The Blue Jackets are coming off of a huge win last night against San Jose to close out the season series at 2-2-0.Â It was in thrilling overtime fashion in front of a sold-out crowd at Nationwide Arena.Â Did we mention it was without key roster players like Steve Mason, Mike Commodore, Jake Voracek, and Marc Methot?Â And at this point, the lost seasons for Derick Brassard and Pascal Leclaire go unmentioned. Â

Late last summer, before the season began, I had a post titled, â•˛Why This Is The Year.â•ˇÂ In that post I talked about one key ingredient to the Jackets potential success this year - an identity.Â The reason they continued on with a winning streak in early January, while missing more regular players than you can count on one hand, is simple. Â It's because Ken Hitchcock has instilled a system that is not reliant on any one player, including Rick Nash, but rather based around responsibility and effort.Â They won games that featured names on your scorecard such as Craig MacDonald, Derek MacKenzie, and Alexandre Picard.

Scott Howson saw Hitchcockâ•˙s plan, and in turnÂ developedÂ a blueprint for the future.Â One that, after last night, has proven it can work.Â The Blue Jackets were laughed at when they signed defenseman Mike Commodore to a hefty off-season contract.Â However, he has been a rock defensively and is on pace for a career year in offensive production.Â Or Fedor Tyutin, who Friday night set a career high mark of 6 goals in a season, with 30 games left to go.Â The brilliant move to acquire Jason Williams mid-season is paying off so far.Â He has collected 3-3-6 and a +1 rating in 10 games with the Jackets. 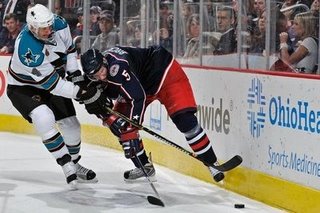 And last night, an unlikely hero in Christian Backman sent the Sharks home losers as he scored the game-winning goal in OT.Â Backman has been subject to much scrutiny in Columbus and throughout his NHL career, but he had a monster effort in a night where he was asked to step into Mike Commodoreâ•˙s spot, logging nearly 24 minutes of ice time on the top pairing.Â This is the perfect example of why having a system is a good thing.Â A player who was scratched just a couple games before stepped into the line-up and was one of the heroes of the night. 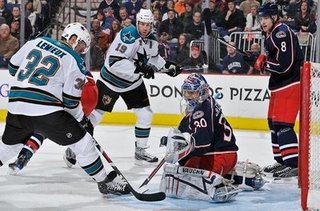 The other hero being Dan LaCosta. Â A Syracuse Crunch call-up on emergency basis to back up Wade Dubielewicz while Steve Mason recovers from mono. Â He held the San Jose Sharks to 2 goals, allowing the Jackets to have a chance to win in the end. Â In his first NHL start, he faces the best team in the league, and does what he needs to do to get the win.

Just 9 points separate the standings from 5th place Anaheim to 15th place St. Louis.Â Oh, but the Blues have 4 games in hand on the Ducks.Â This one wonâ•˙t be over until the very end, and it is going to lead to very fun times around Nationwide Arena.