We learned today that Blue Jackets defensemanÂ Rostislav Klesla will miss another 2-3 weeksÂ with a slightly separated shoulder. Â This is just another injury to add to the long list he has faced this season.
It seems that every year, there is at least one player that cannot shake the injury bug, last year it was Fredrik Modin. Â Freddy was such a solid and healthy player throughout his career that it was a bit shocking at the time, and even more so in retrospect. Freddy is a guy that played 74 or more games in 8 of his first 10 seasons in the NHL. But now, doing a quick Google search of Freddy shows "Fredrik Modin injury" as the most popular search yielding over 28,000 results. Luckily, Modin is healthy again this year, even playing through significant injury such as multiple broken toes.
Unfortunately for Rusty, he doesn't quite have the iron-man past to fall back on. He did play 82 games last year, but the list of injuries is starting to pile up throughout his whole career, based on a quick look at TSN's injury tracker, found here. 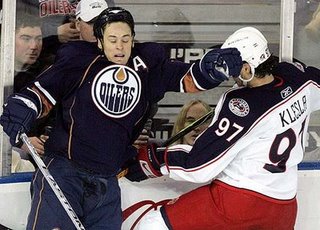 What is most disappointing is that Rusty has been very effective in his 23 games played this year. He's tallied a goal, 5 assists, a +1 rating, 24 shots on goal, and 45 hits. Scott Howson and Ken Hitchcock both like the player Rusty can be, and I can see why.Â
All in all, we wish Rusty a speedy recovery and hope that he can be healthy the remainder of the season and help us in the push for the playoffs.