Share All sharing options for: A Great 40 and Meh 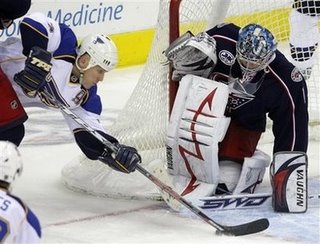 In the first two periods the Jackets were dominating everything, but the fights. The final twenty are better off forgotten. We may be better off with this ending because it will not allow the team to get relaxed (not that they would anyway). Hitch described the third as "getting casual." That about sums it up.

Fedor Tyutin was very solid tonight. His PP goal got the team off to the start we desperately needed. All "set-up" on an awful Backman keep in, in which he was tripped... way to contribute. I realized the thing about Tyutin I have had a hard time describing. He always passes the puck to a teammate with time and space. He rarely puts his teammates in a position where they have to make a difficult play.

I thought we saw a rare sub-par night from Hejda. There was a point midway through the third where we elected to play him the entire Penalty Kill. There were 3 faceoffs on the PP, not a lot of faith in Backman or Methot in that spot, I suppose.

Chances chances chances. Nash had 3 golden chances, Umberger was flying, as was Voracek. Howson is getting the right mix of players folks. Hard working guys who are good in the locker room. The top line played like a top line tonight. A very welcomed sighting.

Dap to Derek Dorsett. He fought well in the 2nd period of his fight, but got rocked in the bookends. He got busted hard. BUT the team responded strong. Nash had a great chance and then Murray pots one. That is the type of response you need.

Mancrush of the Game: Fedor Tyutin, I'm simply falling in love with his game. So smooth.

Whipping Boy: Backman, outside of giving us the first PP of the game, he did nothing for me. A lot of people are happy with our top 4 defenders, but when you play Hejda a whole two minute PK, that says something, that can't last. Klesla seems to get tossed into a lot of trade proposals, but without adding another element to our blueline, I don't like it's top four depth since Methot has come back down to earth.