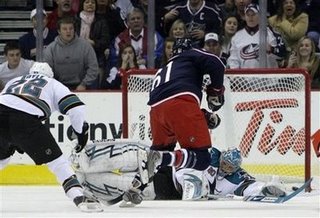 With a third string goalie, two defenders out of the lineup, and a top six forward out, they defeat the best team in the conference.

This team is the most frustrating to figure out. It could be argued that our best hockey was played this year when 7 of our regulars were out of the lineup. What this tells me is we check and play a little harder when we are undermanned... Why don't we do it every night? With a full lineup?

However, we got a fortunate break and put a quick goal on the scoreboard. As we know this team has confidence issues in the goal scoring department. This team is simply different after we score in the first 10 minutes. These are mental gaps that must be bridged.

I should be more excited after a slump busting effort with a full house, so lets get to the positives.

Big congrats to Danny Lacosta on his first win. He is a goaltending draft pick which means he should rattle off about 4 straight shutouts now.

RJ had a tough night in Pittsburgh, but played a really strong game tonight.

Nash found his way back onto the scoreboard. He had a nice finish. I thought he looked a bit better away from the Juice (even though they did connect on the second goal tonight). I think we could try to split them up for a while. Their chemistry is awfully streaky. Give me some Nash - Malhotra - Voracek and Umberger - Williams - Huselius.

Derek Dorsett stepped up big with the body tonight. However this is the game I expect from Dorsett every night. That is his role on the team and I feel he has gotten soft since his injury. We need this from him every single night. He and Boll both.

I thought the D held it together without Commodore in the lineup.

The competitiveness level was much higher tonight. I think we have been relatively consistent with this, but when we give up a couple early goals we decide to play a different game.

Mancrush of the Weekend: Fedor Tyutin, I thought he played very strong over the weekend.

Whipping Boy of the Game: I'll put Hitch down here again and here is why. Peca made a very interesting comment the other night, "[after we get scored on] we get rattled from the coach out." It seems like we are seeing different combinations every other shift. Manny with Nash, Umberger with Nash, Williams with Nash. I assume he is looking for a spark and he wants better play. Shaking up all the lines is a knee jerk move and it seems to be a nightly routine. Sometimes you just have to trust the guys you are putting together. If they don't produce over a couple games, split them up.