Share All sharing options for: A Closer Look: Mike Commodore

Where he fits in the line-up: Head Coach Ken Hitchcock and the Blue Jackets organization made it very clear to Commodore where he fit in the line-up prior to signing him last summer. A top â•˛shut-downâ•ˇ pairing defenseman that will see a lot of minutes at even strength and on the penalty kill. What has been the biggest surprise to this point are his contributions offensively. Commodore is solid and steady at getting the puck out of his zone and protecting his goalie.

Why you need to watch out for Commodore: Heâ•˙s got a big personality and a side of attitude and isnâ•˙t afraid to use it. As the season has progressed, Commodoreâ•˙s role has increased not only on the ice but in the locker room. He has solidified an already solid leadership group and is able to back up his words with his performance on the ice. He has playoff experience and brings a Stanley Cup ring from his time in Carolina. His value to this team cannot be understated. You also need to look out for Commodore because he will level you like a truck if you don't keep your head up. 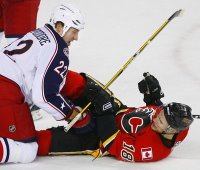 Scouting Report: Commodore has tremendous size and plays a physical game. His play at the end of last season had a lot of people questioning his value, but so far in Columbus, it appears the issues may have had more to do with Ottawa than any one player. I would argue heâ•˙s just now truly coming into his own and the best is yet to come with Mike.