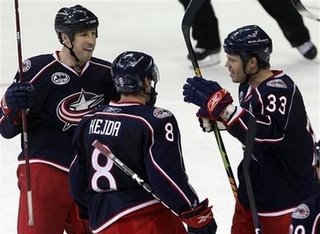 Back-to-backs for the Jackets of yesteryear was a deathwish. Although this was our first road win on the second half of a back-to-back for this season, our competitiveness level has been high all year. We beat a fully equipped Detroit team and a battling Hurricanes.

Steve "Mono-This" Mason is back to his old sexy self. Bad turnovers and deflections were his only let-ins. His movement post to post was back on top. Carolina came out on fire and came in blasts in the second, Mason kept the score in our favor. This is the benefit of the franchise goalie. If one goes in the momentum swings.

The Carolina game was the first one in a long time where I saw a true killer instinct. After we got the second goal, we were hungry for the third. It seems that this team believes it will play in tied or one-goal games. The powerplay came up big in this regard and it will need to continue that to win games down the stretch.

61 quietly got three points in Carolina, but was mostly absent in the Detroit game. His points do come in bunches. When he isn't scoring, I'd like to see him a little more physical, but I can deal. I think he, Juice, and Manny spent at least 3-4 minutes in their own zone in this one. I'd like to see Nash with Voracek for a while, spend some time apart from Juice. Their chemistry just hasn't been there recently.

Secondary Scoring. This Jackets team has the most depth of any team on record. When names like Torres, Chimera, Malhotra, and Commodore are hitting the scoresheet we will be winning. I thought Raffi and Chimera are both looking better and better. It takes time to recover from injuries, I'd like to see both of these guys more physical, because they can really punish someone with a check.

I need to give props to Christian Backman. He has continued to play high quality hockey. From the last couple of games it seems as if he was the rock for young Russ. I don't think we've seen nearly as good play with him paired with Methot. Backman may have been a little better than many were giving him credit for. His high salary and PP QB job turned fans sour on him quickly, but he has played pretty solid 5 on 5 this year. Backman is a +5, Russell is a -11, kind of strange.

Mancrush of the Game: RJ Umberger has been a man possessed lately. We seems to be winning every board battle and gasses past defenders at will. He has been the best player for the last two weeks. He got paid on the PP tonight, but has been a highly competitive player. The Torres-Umberger-Modin line was the best Jacket line of the night.

Whipping Boy: Nobody to whip on today. Russ had a bad night the other night, but is still in the middle of his best play in the NHL.