Share All sharing options for: We Give Up 5 and... Win? 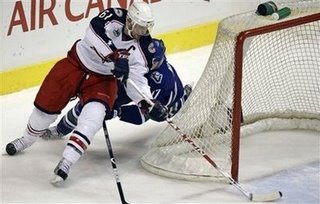 I'm Ron Burgundy?
7 pucks found the twine behind Roberto Luongo tonight and the Jackets win in a shootout 6-5. Yup 6-5. These aren't your grandmothers Blue Jackets.

Luongo did not look sharp, in fact I would say he is still bothered by his groin injury. He actually looked a lot like Pazzy in all of his starts this year (and he has needed ankle surgery since the preseason).

After getting down two midway through the second, the Jackets showed a tremendous amount of character. After Jason Williams first goal off of a one-timer into an empty net, the Jackets roared back from the dead. 4 goals in a 5 minute span and it shocked the Canucks.

Our lead was short lived after a perfectly timed time-out by the Nucks, but we took it home in the shootout.

Nash - I love you man, I do. He was a monster on the ice, a complete difference maker. A 3 point net and the clincher in the shootout. Huselius and he had one of their best games of the year. The passes were clicking. A great play by Juice and Peca lead to the Nash wraparound goal.

A little more about J-Will. Is he really the first guy in team history that can adequately one-time the puck? I think Zherdev is the only other guy I can think of that could do it. His right handed shot, adds a great dimension to the powerplay. The puck movement is better and now shot can truly come from anywhere. This could be the shrewdest Howson move to date. He undressed Luongo in the shootout. It was beautiful.

Another strong game from Manny. He continues to be a valuable utility guy. He is on a 4 game point streak and playing great defensive hockey (although he was -2 on this night).

The Umberger-Modin-Voracek line, while they didn't get on the scoreboard, played a great puck position game all night long. These three guys on the cycle is hard to knock off.

It is nice to see Raffi quickly get back onto the scoreboard, he is an emotional player and was snakebitten to start out the year. His goal was the product to a great hustle play from Jared Boll.

Mancrush of the Game: J-Will and the new PP. One-timers, oh my. Shootout goal, oh my. My true mancrush are these new Road Jackets. 5 years ago, a road game was a loss. I think there was a year we barely got the double digit road wins. We plays with great energy on the road. I fully expect to beat Edmonton. Keep it going.

Whipping Boy of the Game: OKT. I wasn't in love with the Russell-Tollie pair. Russ on the PP was great. Russ 4 on 4 was great, but Tollie didn't do anything to make us forget Backman, which I really would like him to do.