Stepping up in the Clutch

Share All sharing options for: Stepping up in the Clutch 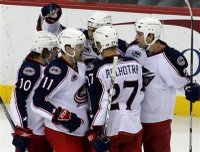 In previous years, the Jackets would not be talking playoffs under current circumstances. The team is absolutely decimated with injuries, yet they are playing the best hockey I've seen out of a Jacket team. 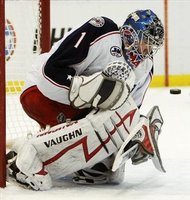 The reason? Well, there are a few. For starters, Stevie Mason. The guy is not only leading the Jackets between the pipes, but he's atop every statistical category for goaltenders, with the exception of wins. If he had been here since October, chances are he would be near the top of that category as well.


Also, the team is seemingly 100% on board with the coaching staff. They have a plan, and the team is executing perfectly. Coach Hitchcock's system is based on hard work, and defensive awareness. Contrary to popular belief, Hitch doesn't employ the trap. The proof is clear if you watch the games- if the Jackets have a lead, or are in a close game, they don't let off of the accelerator. They keep going after the opposition, regardless of the score. Trapping teams rely on opportunistic offense- turnovers etc. Another sign of this is that if an offensive rush by Columbus is broken up, you see the forwards immediatly return to the defensive zone and begin working to retrieve the puck. Jake Voracek is one of the best at doing this, hence is amazing plus/minus. Another example is Nik Filatov dropping down to block a shot, the same game he scored a hat trick.

Another big reason for the Jackets continuing to win regardless of the injuries, is through contributions from bottom six players who are thrust into a starring role. Mike Peca is a good example, he has really elevated his game in recent weeks, scoring a beauty of a goal last night and he would have had one against Detroit if not for an amazing save by Ty Conklin. This is easily the best stretch of play by Peca as a Jacket. Ditto for Freddy Modin. He was the best player on the ice during the Detroit game, and continues to be a workhorse in the offensive zone.

The combination of Derek Dorsett and Alex Picard has been fantastic. They are not only doing their job of hitting, irritating and generally creating havoc against the other team, but they are also contributing on the scoresheet. Dorsett had a beauty re-direct goal in the Minnesota game, off a great feed from Pic. The two are also great at keeping the other team stranded in their end. Manny is being Manny, solid as a rock. He does all of the little things right. Props for fellow Nova Scotian Craig MacDonald, who has worked his butt off since his callup. Boller seems to be regaining his confidence with the fists as well, duking it out in timely fights. He may not always win, but the boys always seem to come out flying after the gear is swept up. He was sucker punched by Donald Brashear, and immediatly went out and scored a powerplay goal.


The resilience this team is showing as a fantastic sign. There has been plenty of trade talk recently, but look at it this way- the team is on fire, and will be adding guys like Raffi Torres, Andrew Murray and superstar Rick Nash to the lineup as early as Friday. If the team is winning now, imagine what they are capable of when they have these players on the ice.


There are still some nagging issues though- as Clint alluded to in his game recap, the Jackets need a backup goaltender for Mase. Stevie looked very much human last night, and is due for a poor game here or there. There has been talk of Curtis Sanford being acquired, I think this is a great plan. Pascal Leclaire's health seems to be quite an issue.


Also, there is the question of whether a team with so many rookies and sophomores in the lineup can sustain such a high level of play. Personally, I think they can. The young guns that the Jackets possess are very high character, winner-types. They hate to lose, and have a fabulous work ethic.


That said, look out pundits, this year's Jacket team is for real.