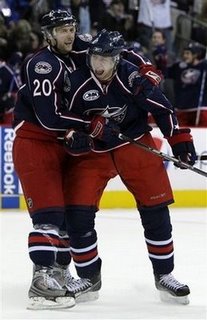 Big Ups to the Nationwide Arena Crowd Tonight. The number one star in my opinion. It was full on a Tuesday with miserable weather and came rocking.

A human, Steve Mason appeared once again and only emphasizes the need for a quality NHL backup. If Pazzy is out for a prolonged time, we need someone to give the kid a break. Hopefully a stop gap will take form soon. The missed glove save was the softest we've seen from Stevie.

The TEAM came to back him up tonight. After that softie, our forecheck was strong and we got two quick ones. After the first one, Mase took a quick little refocus skate. After the second we got a fist pump. Mason has one so many games for this team, it was great to see them bail him out after a bad goal.

I didn't see much of Filatov. I'm not sure he took a shift in the third. I know Hitch has to trust his players, but I'd like to see a little more of the kid. On the plus side, Voracek and Picard we on the ice in the final two minutes.

Huselius played his best game in a while. He, Umberger, Voracek, and Modin have really stepped up their play. It is truly a great sight to see.

I actually really liked Picard's game tonight. He, Boll, and Dorsett all effectively laid the body on the forecheck. Great checks which helped gain control. Dorsett was jawing with Darcy all night. He couldn't get him to dance. I'm sure Tucker didn't want his face smashed like last time.

Mancrush of the Game: Fedor Tyutin played an amazing game. His little quick plays all add up. He makes little saves at the offensive blue line that maintains the possession and it often goes unnoticed. Also watching him closely, he's body positioning is uncanny. He's able to make quick little turns with the puck in the corner that allow him to move the puck up ice effectively. Ghost of Blue Jackets of the past, would just rim the puck. Hopefully those days are gone. Methot was also very effective and very physical.

Whipping Boy of the Game: Adam Foote, Just because I can.