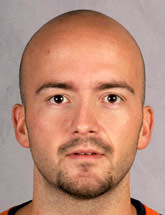 The Columbus Blue Jackets claimed goaltender Wade Dubielewicz off waivers from the New York Islanders.
Dubielewicz, known as "Dubie", spent this season playing in the KHL in Russia, until he and the team agreed to part, so he could return to sign a new contract with the Islanders. Â Due to the terms of the Collective Bargaining Agreement, Dubie had to pass through waivers before being officially added to the New York roster, and was claimed by GM Scott Howson.
Dubie is still a relatively young goalie at 29 years old. Â In 2003, he signed as an undrafted free agent with the Islanders. Â Although you may have not heard much about him, Dubie has had a pretty solid start to his professional career. Â He set and still holds many American Hockey League records and also won the award for best AHL rookie in 2003-04.
In the 06-07 season, he helped carry the Islanders into the playoffs, despite the loss of franchise goalie Rick DiPietro to injury.

Dubie has pretty good stats in the NHL, considering he has spent most of his time playing for an Islanders team that is pretty weak on defense, and is currently sitting in last place in the NHL. Â His stats stand at a 2.55 GAA, .920 Sv. %, with a record of 16-13-1 over a 4 year period. Â
Dubie fits the mold of the type of players Scott Howson has acquired. Relatively young with, hopefully, plenty of gas left in the tank. Â Regardless of what happens with Pascal Leclaire, Dubie could turn out to be a solid back up could be around Columbus for more than just the remainder of the season.