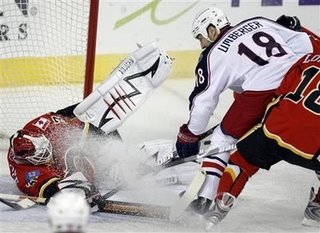 Last year the All-Star break destroyed the momentum of the playoff push. This year the break cannot seem to come at a better time. The Jackets have played their best hockey of their existence over the past month of the season. On the latest Canadian road trip, fatigue was obvious.

Steve Mason, a few weeks ago could not give up a goal, now looks very mortal... and slow. He has been bothered by a back injury and has played through like a warrior. He is well aware that with Paz out for the year, any hopes of the playoffs rests on his shoulders. I think Dubie will see the net in the second half, and he needs to. A 20 year old rookie cannot be expected to play night after night, especially when he is injured.

Rick Nash who is recovering from a sprain knee, has looked very good in his return, but I'm sure there is still lingering soreness that a few days off the feet will help with. The All-Star game won't push him too hard. Hopefully it keeps his hands in shape.

Torres and Chimera should both be in the line up again after long term injuries. Both of these players can chip in more goals. The Picards and MacDonalds of the world have done well, but they do not find the net as often as these guys can. Chimmer especially is great on the forecheck and his wheels keeps any defender in check. Hopefully he recovers fully because Chimmer without wheels is a mediocre third line player and that is certainly not what we need out of our new first line center............(


Brassard, I know he's not coming back this regular season... I said regular. I think he will push his recovery and lobby very hard to return for the postseason. I know this is not something Howson would necessary want to risk, or count on, but he if Brass makes a full recovery and gets into game shape, I don't know how you could tell him no.

On the other hand, super rook Filatov and his injured leg could be a blessing in disguise for the team. It would save a year on his rookie contract if he doesn't suit in two more games. In the long term this would save a year of big dollars. In the short term, JSon Williams has come in and played very good hockey and fills our minimum quota of 1 right handed scorer.

Freddy Modin, I think Freddy feels like he cheated the team out of some money last year. He is doing everything he can to put himself on the ice this year. Hopefully a few days of rest will take away the aches and pains. Since he recently skated at practice, I think that is a good sign.

I have said repeatedly that this is a roster of a playoff team. We are currently showing the makeup and character of such a team. With a halfway decent powerplay we have shown that we can pot some goals. Even though we didn't play great (as the results would indicate) on the three game trip we did score 13 goals. This has traditionally been the problem for us. If our offense continues this pace and our defense remains steady, we are going to see a great second half of hockey and we deserve it. The good news is it seems as if the best is only yet to come.

Thank you personally Voracek, Mason, Filatov, Brassard, and Russell for coming in and playing like NHL players. In our history we have only been blessed with two other such players. The high picks are FINALLY paying off.

I know Howson will make a deal or two to make this team better. I do not think we are a team that a 1,2 or 3 seed would like to play against. We have shI think we also will be attractive to some UFAs in the offseason, as were the Hawks last year.

We are a team on the rise and we have done it with a bunch of good guys with big hearts. We need to finish.