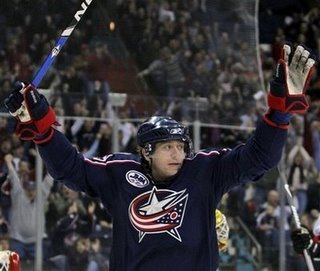 What a ride this will be. In years past a 1-0 snoozer would have just been a frustrating game to watch. If we won maybe we would climb to 13th place. It was these types of games I wouldn't have minded if I skipped it. Now, I have to say that even though the hockey was meh, that was an exciting game. My, oh my, how playing in meaningful games makes everything exciting.

Where did the Senators go? They were a one line team... but they didn't really lose too many guys off of their offense... how did that happen? We out competed and outwilled them all night long.

Jakub Voracek was definitely the best player on the ice for us. He seemed to be the only one able to create opportunities tonight. He was buzzing around the net constantly. He'll need 7-8 goals against Dallas to get that Rookie of the Month so he can pass up Bobby Ryan.

Steve Mason was solid once again. His lateral quickness was back last night. Hopefully the slapper he took off of his knee doesn't tighten up. I know Hitch will want him in net against the Stars with them charging. Of all the western teams they are the one with the games in hand.

Mancrush(es) of the Game: Commodore and Hejda were stellar, especially down the stretch on the back to back PKs. They seemed to be on the ice for about 4 of the last 6 minutes. These guys play icy cold. If they didn't have strong stomachs for playing the key minutes in the big games, then they certainly will be ready now.

Whipping Boy of the Game: I'm putting Hitch back here because of the PP. I do not like his set up. Nasher flipped in a lucky one and Voracek scored a Hitch "PP" goal tonight and that might be enough to keep him trying it. IMO, Freddy-Nash-Huselius-Russell-Williams gives us our best first unit. Chimmer-Umberger-Voracek-Tyutin-Commodore as the second.

Lefties and Righties on the point.