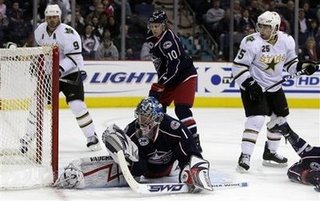 Dallas played pretty strong, pretty hungry and they cashed in on their chances. After scoring two in the first the game swung after a great Manny Malhotra chance. The puck transitioned back up the ice and Dallas scored a dirty goal to take a 3 goal lead. That seems to happen all to often in the NHL.

I won't dwell too much on this one. Mason was not sharp. He probably needed a break. We just never got that clutch save to sustain momentum. The team did battle back strong, but Dallas got dirty and kept extending the lead.

I thought Huselius and Voracek played very strong games. I thought Torres and Peca both played (extra) poorly. Raffi has a lot more to offer us, we need to see it.

The good news is, I never felt like the team quit. In the past these games have often been farts in the wind.

Mancrush of the Game: Although nobody really stood out, Kris Russell made one play at the offensive blueline that I've never seen one of our players make. It was a strong sneaky keep in that instantly created a mini odd man chance.

Whipping Boy: I'll put Raffi here tonight. He's a lot better player than that. He looked no better than a Joe Motzko type call up.